This note describes my only real invention this year: a USB 5V in and USB 5V out, where the 5V out will only be kept as long as a built-in watchdog timer is fed with an edge of a signal from an output of an internal I2C chip. Since Google could not find any such for me (or I didn’t feed it correctly. Update: [1]) then I had to invent one myself (Update: I still would have to invent this one). The unit also has two 230V AC relay outputs and two open drain MOSFET outputs. Standard disclaimer for everything here and in all my blog notes.

Two of my needs solved

I use an XMOS startKIT as my aquarium controller, see My aquarium notes (Controller).

The functionality of the watchdog part of this unit may just be something you have been waiting for a long time. You could build one (diagram included) – or wait for somebody to make a little breakout board of it.

The box shown in the block diagram above works like this: when 5V_IN is powered it takes about 7 seconds before 5V_OUT is applied. Then the Supervised MicroProcessor Unit (=SMPU) has about 5 seconds to write to a port on an I2C line to tell it is alive. As long as this is forever done within 5 seconds, then 5V_OUT is stable. If not, then 5V_OUT will be removed for about 7 seconds for a new trial.

Not on (=/on) means that the line needs to be pulled down for the relay to switch from off (=not activated or /activated ) to on (=activated).

A smart thing would be if the SMPU is able to read, increment and write the number of restarts every time, and upon some request this value is shown to a user of the SMPU – for diagnostic purposes. I have a FRAM (from Adafruit: here) to do this as simple as possible (even if there are libraries to modify the FLASH in the XMOS world).

Design and construction by me. However, you may copy as much as you like. Or use it as a start for your own design.

The circuit diagram is drawn in iCircuit (1.9.1). The .icircuit file is available here. Some symbols are not correct, like the N-MOSFET HEXFET TR1-TR6 and the varistors V1-V2. (I have not used the simulator part much in this diagram. But I have taken out excerpts and made smaller diagrams for simulation.)  (As I may update the diagram this unreadable front-end picture may not be updated. But the PDF is).

Tip: To print the PDF on two pages, download Adobe Acrobat Reader DC and print as poster 30% and portrait mode. Then cut the the right side’s left margin at the index in my PDF, and glue them together.

Observe that the diagram contains 230V AC circuitry for the relay outputs. Disclaimer: even if I may have some advice here, you are responsible that your local rules and regulatory claims are adherred to. 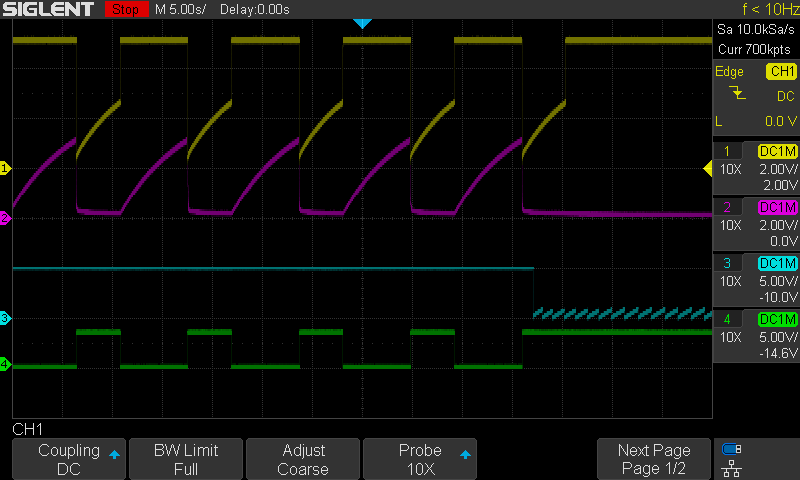 The idea with the above scope measurement (made on my Siglent scope) is to see how no watchdog pulses will keep the lower green 5V_OUT pulsing to 5V (about 5 seconds) and back to zero (about 7 seconds) until watchdog pulses (seen as the blue right part’s sawtooth pattern) finally will keep 5V_OUT stable. Until these pulses fail.. (then repeat).

Both parts of the monostable multivibrator is triggered with a high-to-low pulse on /1B and /2B inputs. This is to avoid an ill defined 5V_OUT condition when 5V_IN power is on the rise. Now it takes about 7 seconds before 5V_OUT is applied. I have no LED for 5V simply because the SMPU box is rather visible beside the aquarium. Also, such a LED would give me little. It’s rather easy to see when my aquarium box has no 5V in!

The diodes are all to discharge large capacitors during power-down. They are schottky diodes, measured to 350 mV reverse voltage.

The boards have two powers that are independent of each other:

When 5V_OUT is at 5V it’s assumed that the powered unit comes up with a functional I2C line, including the 3.3V power. 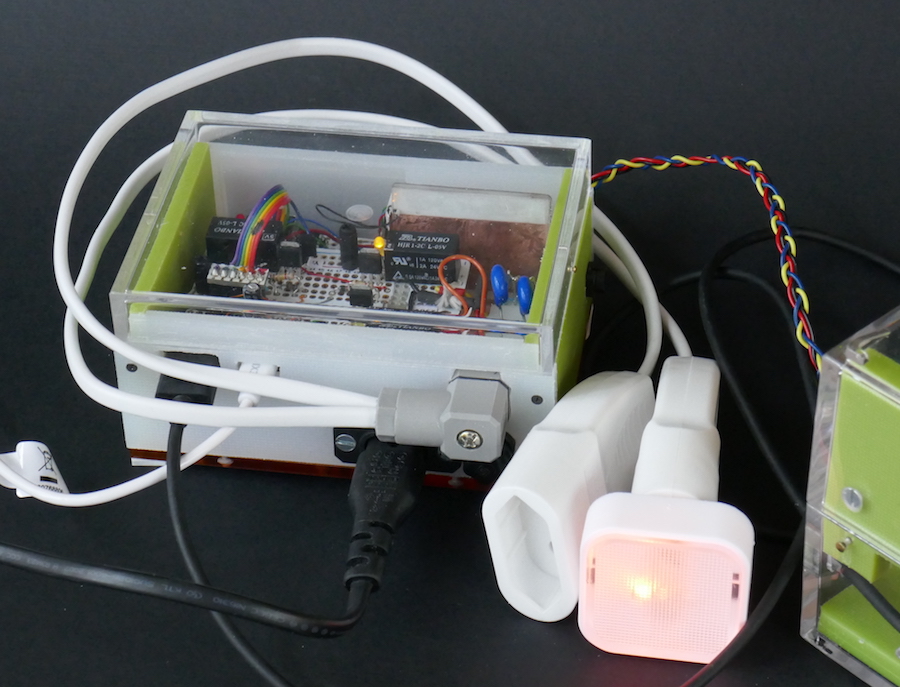 See description of the relays below. 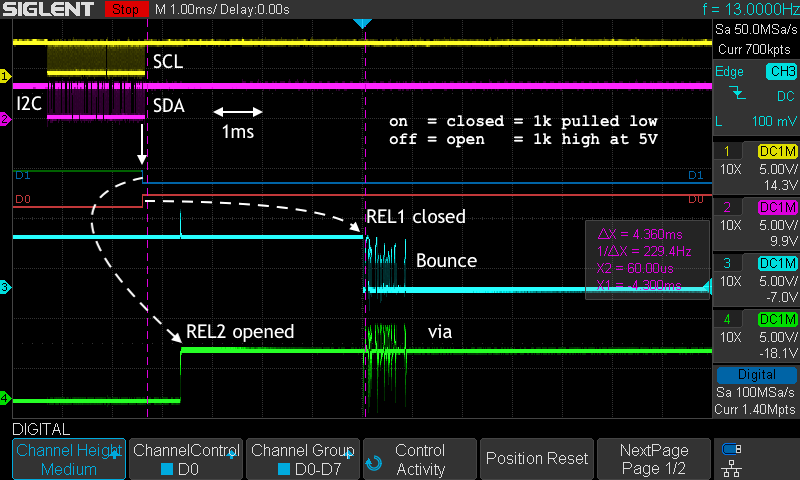 Above we see oscilloscope picture of the two relays alternating between one on and the other off and then changing both. 5V is switched by pulling a 1k down. The relay needs about 4.3 ms to saturate the coil and pull the switch and about 760 μs to de-energize to release the switch.

You can see the rather extraneous bouncing of the relay contacts when they close. For this test it would enter the other contact set through via the decoupling network C8/V1 and C9/V2 that I did not passivate by shorting the two 230V AC inputs 18 and 24. When I did that only some very high frequent noise passed.

The purpose of this measurement is to see if I ever had noise from the relays disturbing the I2C message. Even if the lines MCP230008 output pins change on the second to last falling edge of SCL then the relays as both being activated and released have so much delay that there will be no noise entering the I2C comms. That is, if it is fast enough. I use I2C speed of 100 kbit/s (kHz). The full I2C message is seen above. However, there should probably be no new I2C comms before well after 10 ms!

“Feeding” makes sense in an aquarium context. In any other context, just read “extra general pins” for some actuator type. In Fig.2 and you will find a “Loft board” (added in an update). It’s a tiny board routing the two vacant outputs of the MCP23008 via the standard MOSFET output transistors. I have added the two “open collector” (now: “open drain”) outputs plus GND, three pins in all. No power, as the general advice is to avoid this, not to introduce electrical noise getting into the USB 5V as used by the processor. Besides, this could open for 5V or 12V or even 24V powering of the actuators. Remember that the MOSFETS have built in zeners to protect them. Externally, in addition to power, I would need to add (depending on actuator type) a reverse diode across the actuator to short the reverse current when the unit is unpowered. I think this is what they call a “kickback” diode.

I have not designed the feeding automation yet, but I assume it would be a mask with a small hole that would open for flow of the tiny food pellets for some time, like 100 ms. (Aside: It would have to be situated away from the damp of the aquarium to avoid the food becoming wet and clogged. But I assume I don’t need any automation to position and park the unit.) There would basically be four actuator types to choose from, but I have allowed for the first three types only with my present Loft board (as always: standard disclaimer):

Box with open drain outputs from Loft board

Fig.7 – The box with the Loft board and open drain output connector (press for more pixels)

The updated box is seen above. This is how a design looks when it has been through organic growth! The Loft board is seen (center and right, front=top of picture), plus the 3-pole female Binder connector (left, top). (Left bottom are I2C in (right cable) and I2C out (left 4-pole mail Binder connector)). Internally in the box the boards are also pluggable, both the inputs and the outputs are disconnectable. As with all cabling between boards/boards and boards/connectors.

See all boxes mounted and in use at My aquarium notes (chapter Four boxes seen). There you will also see this box in front, so that the single button is seen

I did find a solution. It is described in detail in My aquarium holiday automatic fish feeder (for granules).

Since I did not want to make two of the boxes described here I made a half-way “simulator” board that I use by by desk. The real thing is working with the proper aquarium controller now. I also made a connection box that takes control from the open drain output cable shown above. One output is for a solenoid and another for a LED. Then 12V DC for the solenoid and the cable to the solenoid. It’s shown here. The circuit diagram is seen here:

187_fig8_circuit_diagram_output_and_fish_feeder_oyvind_teig
Fig.8 – Circuit diagram of the half-way board, the connector box and the feeder (download PDF here)

Version 1 did not have the Z1 (1N6263 15 mA Schottky diode), C1 (10 nF to take EMC) and C2  (10 μF to take bigger discharges) but I experienced that the SW read the input but did not set the outputs. No blinking LEDs and no feeder working, but the button was taken and the SW did talk with the chip. I had not seen this over a month for the real board (Fig.2, but without the solenoid in the feeder present) so I assume that the MCP23008 I2C chip had been reset by some noise and gone into input-only configuration. I have now added the above, but has for the general case also changed the SW to set pin direction on every some writes that would have no side effect (since all output pins would be low until next write), since the watchdog functionality is so important. Remember that I2C is low OSI level protocol with no parity, checksum/CRC or retransmission. It is assumed to be inside boxes or on boards where noise is at minimum, or where just sending often enough would mask any problems. Now, was the source of the noise current in my cable, caused by me not having a Schottky in the feeder? Answer: no it was not. Have a look at the current in that wire in the link above the diagram.