Go to Standard disclaimer, valid for all notes – and other disclaimers.

My “classic” home page (since 2000) is at www.teigfam.net/oyvind/. I certainly update it. But it’s here the action is, with home/ appended.

I spend hours after hours, days after days on each note. I try to keep them updated, years on.

And 2.5 years after its publication I discovered another writer’s article that made such impression that I mention it here, for you ([1] if you want to look at it later on, or [1] if you want to be distracted immediately). 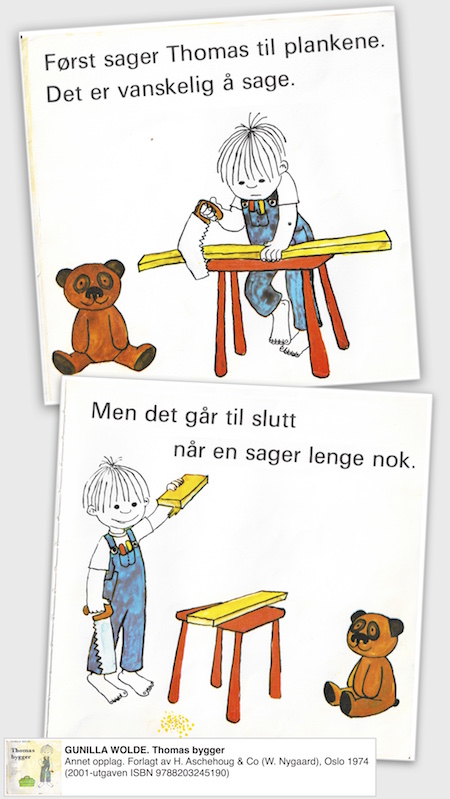 See Thomas sawing (picture). This blog is all about all my attempts with that broken saw. It’s always starting out as difficult, the saw is not cooperating. Then, after having tried long enough, I try to write about what I’ve come up with. I don’t feel like an expert on anything. I learn as I write. I hope that even my failures may be of interest.

I have some header images that are chosen randomly by WordPress. The oldest first:

These quays were said by the locals to sit on the top of the crane for an hour or two in the evening. Then they took to the wings and disappeared. I put my camera on a tripod and shot some pictures. My Lumix DMC-TZ100 did f 5.9, t 1/320 s and 500 mm focal length 35 mm format, digital zoom not used. When I looked at the result I discovered the bird sitting on the lantern. Not on the top of the top, but almost. But from the ground, literally and on the other side, it’s here.

I added this picture as an afterthought to my note 211 when I discovered that one of the houses had an open door, leading to a staircase inside, up to a first floor. We literally were there. I just love these miniatures by Amsterdam Streets. There are doors on the corners, and in the fronts, with and without stairs, or even staircases. I don’t know what goes on inside these houses, but I can’t avoid looking at them as a set of something to explore. I hope that some of that exploration is reflected in these blog notes.

We have pizza on every Thursday. This is my day for making dinner. Since Mari found a certain video about Neapolitan pizza making on YouTube, that’s what I have done. I start with..

..fresh yeast, having added some sugar, in a cup. When I was little, my mother let me do this: stir yeast and sugar with a spoon. She used a national coat of arms decorated soup bowl that my beloved uncle Halfdan had used when he served as the King’s guard, between the wars. I loved the smell. I loved the setting. But recently I discovered that stirring is not necessary, however it makes the process faster. Then I pour that fluid into some room tempered water (originally from the cold tap), and some flour. After some 15 minutes the biology raises to the beauty of this yeast mixture. The smell and the setting.. are still from the fifties.

I was getting rid of leaded solder the other day. I unreeled the solder and put it in the red “dangerous waste” box. But the blue reel was so nice. I shot lots of photos for a new header image. It took some time, no new header. Then I discovered an empty reel. It was green and had contained unleaded solder, of course. I decided to shoot some pictures of it as well. That’s when I discovered what the pair of them might be up to.
I think a reel may also be called bobbin or spool (depending on usage?) – and in Norwegian: snelle. The reels’ labels have printed Cookson Electronics Assembly Materials and www.alphametals.com and Made in the EU on them..

Standard disclaimer: Valid for all blog notes. I have no affiliation with any of the companies or persons I mention in my notes. I have no ads, there’s no money involved, no gifts are accepted. No donations, no affiliate advertisements, no rewards and no supporter support! I write what I think is right, and I strive to do it carefully. It’s entirely a hobby with no income of any sort. Just fun and expenses. A site a year doesn’t cost much, and I get my pension independent of what I present on my web pages. I always ask for permission to publish material that is not my own, and always refer to the source. Some time I have also paid, if I think it necessary to keep my writing going. Repeating, I don’t have ads on my site. I don’t sell products/services on my site. I don’t promote a business on my site. If there are more don’ts, just add them!

Narrative style disclaimer: These notes are mostly of log-type, since I write as my investigations proceed, more like stream of consciousness texts. They are (I assume, rather confusingly) readable during that process. If that is “structure” then that’s what it is for us. Exceptions would be if I have had to relate to some magazine editor with an article (newest 2020) or when a paper has had to go through peer reviewing (newest 2013). One more thing. In some notes I actually develop things (like here). You may suspect that I don’t follow the Waterfall Model, V-Model or use Agile (software) development, and that I use a kind of stream of ideas and write as I go. I couldn’t have expressed it better myself. Being mostly alone on these project with less feedback that I would wish for, I still hope that the results turn out to be rather homogeneous, readable and understandable. And possibly possible to repeat or become inspired by?