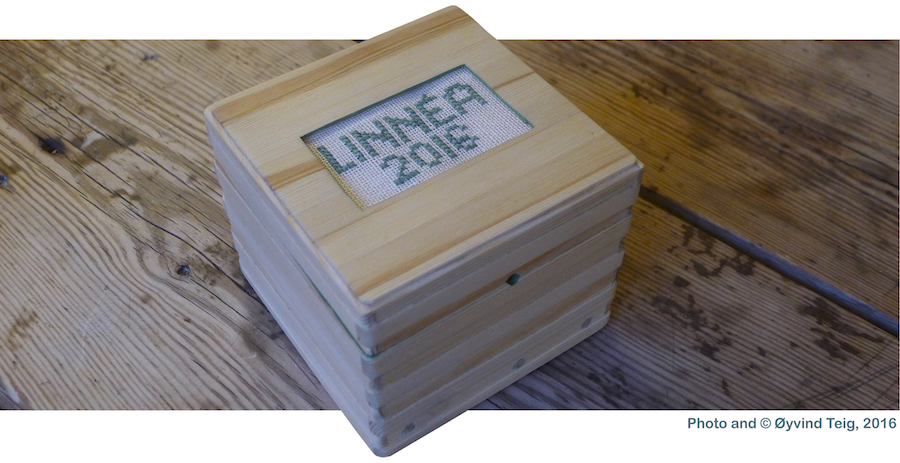 This is a jewelry box for yet another little charm of a grandchild. It’s made of pine lists 4 x 12 mm and also from 12 x 12 mm lists that I now am able to make other dimensions from, using my still rather new FET table saw.

I decided to make the bottom like in the previous small jewelry box. It’s zigzag instead of plain. I still think it will be easier to pick up small jewelry that way. But this time I used my saw to cut grooves in the lists so they were easier to glue (picture below). I cut the bottom so that pieces in each end made small dowels (above). I used them as visible placeholders that I glued into the box at the same instance as the box was glued. It couldn’t be inserted afterwards. This time I let them come through the wall asymmetrically.

The main walls I made from 3, 4 and 5 mm thick lists with grooves (above), to give the sides an uneven appearance. But I could have used only two dimensions, it probably wouldn’t look much different. The walls were joined with finger joints where each section had equal height (fig. 2). I could have made them individual with less than a mm difference to let them match with the horizontal lists, but most people probably won’t notice.

The final touch is again Mari’s green embroidery of name and year, made with cross stitching. The top has an extra layer to hide the name plate, so it’s easy to push in (and out..)

This time there is an inner box that’s lifted with a centre dowel pin. It’s screwed and glued to a base that’s then glued in the bottom of the box. This way there is no tempting visible screw. The box also has the function to hold the lid, so the lid has no piece of it that grips down into the base. This needs so high precision that the inner box is directional. If it’s inserted the wrong way then the top and bottom wont’ fit so nicely. So I made a green dot and a scar, it’s easy to guess that they should be aligned.

The top and the bottom join horizontally in the front and back, but the joining lines on the sides are tilting. The back edge is about a cm higher than the front, about half the height of the inner box. So it’s impossible to assemble the top and bottom wrongly. It also looks nice.

And then the green painted details. Finally, the case was treated with beeswax on all the other surfaces.

©2016 – Original design and woodcraft by Øyvind Teig, Trondheim, Norway. Please help me with the English terms here, I’m not a woodwork-English specialist.