This blog note is in group Hobby and is about a lamp for my office, not at work – but this time at home. The room is quite tall with 38 degrees roofs with the top in the middle – earlier containing a white, round Japanese rice paper lantern. However, this armature is meant to fill the room with indirect light reflected from the white roofs and also take the roof “down” to give the impression of a ceiling “floor” above. This gives the room a more intimate feeling. 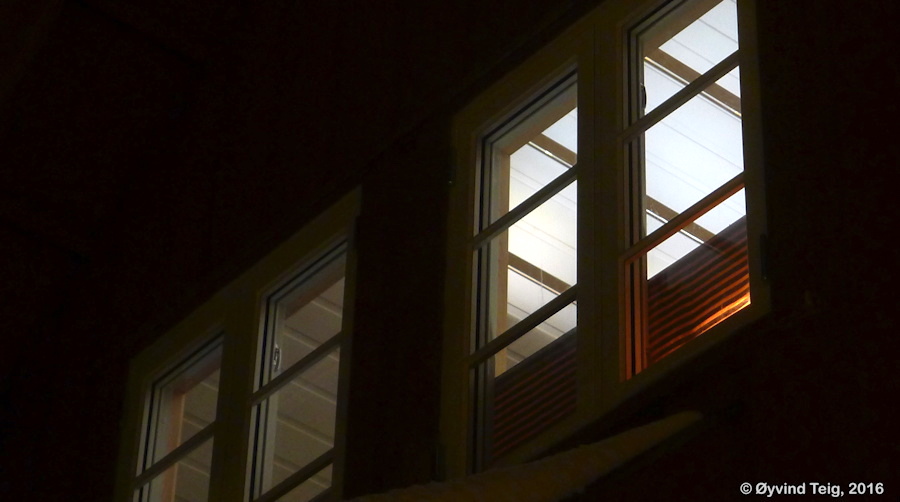 Fig.1 Three of the lamps as seen from outside. Notice center plexiglass. (Most other lamps are off)

Mari and I like to keep the old plank panelling as it has always been – as not painted (or treated) on most of the walls. We have painted all roofs white, forming a nice contrast with the planking of spruce, turned soft brown over the years. A white home without contrast is not our home. Besides, it’s not pinewood turned almost black over the year, so we think the contrast is rather ok. But lighting must be considered with this in mind. (I have described another lamp here, and a workshop lamp here.)

The pictures above show the ceiling of “plank-lamps”. I thought that four in number was fine; it gives five spaces in between.

Three of them each contain IKEA LED DIODER L1324 4-strips warm white (2700 Kelvin light temperature) LEDs, each plank-lamp has four strips with 36 LEDs @ 60 mW 12V, totalling 2.8 Watt (written on the LED strips, even if the data sheet says 3.4 W – that’s probably including the loss in the serial resistors), giving 30 lumen (lm) (hmm.. sounds little). Altogether then 90 lm (..) and 8.4 W LED. However, all three on did not deliver enough, and it was too cosy for the general case.

So I added four Clas Ohlson North Light LED strips that deliver more whiteness (3200 Kelvin), each strip has 24 LEDs, 2 W. In total 8 W, delivered by a 12 V transformer. Just this plank-lamp gave at least as much light as the three others.

Total now about 16 W LED light by altogether (36 LEDs * 3 IKEA plank-lamps) + (96 LEDs for the North Light plank-lamp) = 204 LEDs. When all plank-lamps are fully on there’s enough light to actually do work. But for more ambient light there are 8 switches. See below.

(Disclaimer: this is not an ad or sponsored. There is no money or gifts involved, I do this only for you and for myself)

The leftmost piece (above) on the wall holds each plank-lamp when one end is pressed onto it. The hole isn’t needed, the veneer’s splintering isn’t seen, but it’s the property as not breaking I’m after. See accurate description below. Then you see the strips of plexiglass (acrylic plastic) used to pick up some light to present a strip of light underneath. I tried without, which was not nice since the wires and the LED strips and holders (made by IKEA cutting boards, next picture above) were visible. But I needed diffusing paper around the LED strips, cut with a paper cutter. To the right is the piece on the other wall where each lamp-plank is pushed up into and locked with a nut and an aluminium washer list.

Nowadays you get RGB (Red, Green, Blue) LED strips that may give all colours, controlled by a remote controller. I didn’t want any “smart” solution; not IoT gadgets. But I still wanted to dim them. I followed my recipe from the other lamps I built, to make a switch per plank-lamp that connects or shorts a serial resistor. I found out by trial and error that each IKEA plank-lamp needed 60 Ohm (I used two 120 Ohm, 2W in parallel max. 4W), and the North Light plank-lamp needed 36 Ohm (I used three 12 Ohm, 2 W in series max. 6W). They all give about 8-9 Volts for the plank-lamps, enough to keep them lit about “half”. There is one on/off switch per unit and one half/full switch per unit. All switches are low voltage except for the mains switch for the north LIGHT. The resistor bank is also low voltage and isolated from the mains. Each serial resistor needs to be designed for a blank short. So the IKEA needs (12/60)*12=2.4W and the North Light needs (12/36)*12= 4W. So the resistor bank holds enough wattage and cooling for the very rare case of a short. It would probably never happen inside the LED strips since 3 LEDs are connected in series with a single serial resistor. It could happen in the cable or connector boxes, though. And should it happen then it’s ok.

The best ambient light is the three IKEA plank-lamps on half and the North Light off. That little. The maximum light is not too much, either. 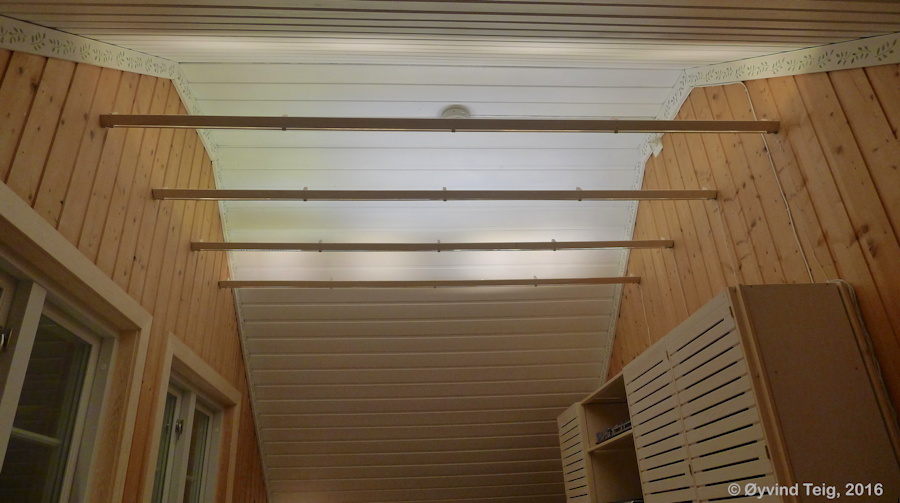 It’s difficult to take pictures of lighting in a room, even if I use the camera in manual mode. Above it looks like the light ends some place down the roof. But it ends quite slowly.

The plank-lamps are not painted or treated, so I expect them to become more like the walls. They are pinewood, but without knots, so they won’t turn blackish. Also, the light through the plexiglass would probably not be so nice if I painted the wood.

The cabinet to the right in the picture above is described in note 119. Even if I write © in the figures it simply means that you may make such a lamp, but I’ll be happy if you refer back to me and this blog note. I haven’t seen anything like it. Here are the fine details, some facts repeated from above:

There are four long (X) plank-lamps crossing the room. In my case they are a little more than 200 cm, but I won’t list any lengths here. Each contains four LED strips (6). Each plank-lamp consists of two 6 x 32 mm wooden lists (1) and five structural holders ((2) and (A)) and four 6 x 30 mm clear plexiglass (acrylic plastic) (blue 4) that display their long side’s corners from underneath. The company that cut them for me made the visible sides shiny by heating them. Each LED strip rests in distance holders (gray 5) 20 x 20 mm with 10 mm diameter hole. There is diffusing foiled paper (folded like rain water guttering) around the lower parts of the LED strips (7), in order not to make each LED in the strip visible through the plexiglass from below.

Only the two lists (1) and the five cross-sections (with hole for cable (8)) are glued together, helped by four pins (12) in each part (2). They became surprisingly stiff.

The light ray (Y!) goes up to the right (as on the figure) or alternatively to the left or up, any way I turn it. The plexiglass (4) picks up some of the light and presents it underneath; this means that if the light is turned to the left then the plexiglass (4) also needs to shift side. All this may be done without dismantling anything since the LED strips, holders and plexiglass all are loose and kept inside the grooved structure. Observe PDF url in figure capture text.