This blog note is in group Hobby and is about how I designed and built a cabinet by challenging the strength of pine wood lists, trying to use as thin material as possible. And how that led to some interesting side effects. The story board below is not chronological and the descriptions are also cross-referencing the pictures up and down. The story is more like a stream of consciousness:

The first question I was asked when I told there was going to be a section without doors with space for printer, even a future A3 flatbed scanner, was how I could assure that it would sit steady? These units require some quite steady base to stand on. Easy, just like the Ivy plant this cabinet was going to be fastened to the wall. I have three screws at the top (Fig.4) and one on the shelf underneath the printer (Fig.5). The printer sits more steadily than ever. With no back plate present and even a list in the middle of the open space this is quite easy.

I have used the same shelf-frame-into-feet-and-corners technique that I have used in some other projects (Multimedia rack, Showcase and Cabinet). I hadn’t seen this design anywhere when I started using it. Notice the lowest shelf frame coming out of the corner list in the picture above. Still I haven’t seen that structural building technique around.

I decided to assemble the cabinet on site from the seven shelf-frames and the vertical lists (Fig.5). There is no cutting in the horisontal shelf-frames; all cutting is done in the vertical components, which all stand on the floor giving the cabinet twelve feet. This is so that the whole structure should be solid enough to be able to be moved, the shelf-frames mustn’t break. I pressed the parts together with a clamp and then screwed (Fig.4). No glue, partly because all joints would in case need simultaneous pressing – not possible for me with amateur tools. The good thing is that it’s possible to disassemble it, even if I wouldn’t recommend it.

I lifted the cabinet up on some planks to measure the sag on the middle. It was 0.8 cm (8 mm) from 180 cm height and 200 cm width, so I was surprised to see it that structurally solid (picture above). I added no diagonal lists to stiffen it up since (1), I was going to test the limits and (2) with twelve feet on the floor then stiffening it up would only increase the tension if the floor is a little uneven. Now it flexes up and down with the floor.

Fig.3 Finished doors are painted white and wiped softly off so show the wood structure

I have made so many door that were designed not to twist (in fact all the doors I’ve made so far) that I thought it was time to loosen the belt. The trick has been to balance the structure with equal and opposite forces, now I broke some rules on purpose. Here I decided to make the doors from only 6 mm lists in two layers, non-symmetric and the doors were then bound to warp somewhat. Wikipedia describes the terms well in the Wood warping article (here) and why it happens is described in Ending the bending (here). The lists I get are not really furniture quality, but almost. I select the best lists I can find at the store, especially without knots. I then store them between clamps with air gaps to stabilise the humidity and select the ones that have survived best. Then I glue the lists with opposite growth rings beside each other. Then I decided to make no air between two and three lists in the top and bottom of the doors to give the front a less monotonous impresseion, but not glue them on the sides to each other. This also introduced an extra possibility for warping. I then fastened the doors with three hinges, which stabilised that side and two or three neodyn magnets to hold the doors when closed. The final warping is seen in Fig.1. The doors feel like “paper” but I have to accept that they are floppy and show some warping. So be it, I wanted to experiment. I have decided not to straighten them up since that would be difficult without easily alter the quite nice visual appearance. This is the price. But I bear in mind that sleek structures in the nature often are not straight as such. I am already used to it, since I hadn’t planned to blog this cabinet, but a visitor asked why not and then a month has passed.

Observe that I have used not so wide lists on the higher upper doors. This is also a means to break up the front.

Fig.4 Clamped while screwed without glue

The handles are from a pallet at work of used data server racks and disk racks that were ready for their last travel. IBM aluminium painted handles, they were so nice. But they had strange inch screw threads, and the screws were too short. Solution: find a metric screw that fastens some place in there and then saw off the screw head and instead use a nut and seat inside the doors. No problem! I did have some inch screws from around 1930 from my grandfather that I had kept as a curiosity, even the paper box, but I wasn’t aware that even some countries in the world, like IBM’s country still uses them. I remember my father talked about “tommeskruer” (thumb screws) in the sixties, how strange he thought it was that our English Austin car still had them.

I decided on some particular plastic boxes and made all the openings and shelf heights accordingly. This even made the width of the two doors under the printer not as wide as the others. There is no back wall, since it wasn’t necessary and it steals space, especially from this kind of structure. The side walls are also made from 6 mm lists and screwed with visible wooden screws. No glue.

The direction of opening is to the left and to the right, the change is between the two doors below the printer.

The lists inside the shelf frames are loose. This way I can store things that would need more space than what’s available for one height. The sides of the open space are covered with 6 mm veneer, only pressed into site with no screws or glue. 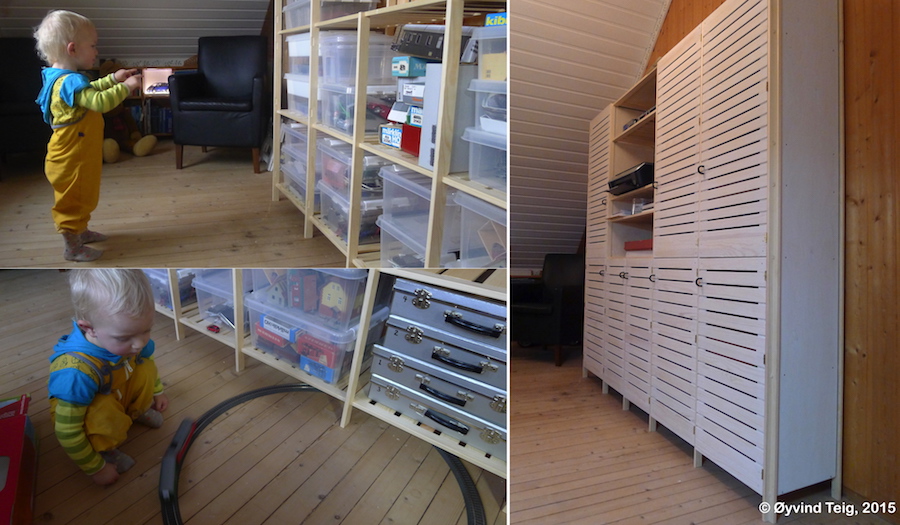 Fig.6 Enough space under it for all

The vacuum cleaner needs some height from the floor, but a model train needs more! So, when a grandchild discovers the box with train it’s nice to be able to utilise the whole of the floor.

Some day I may make an experiment with book shelves? For this cabinet not designed for books!