This is not NMJ’s fault. They of course adhere to the DC wheel specs. The discussion below is interesting, but for the final solution go to chapter Change wheel set.

I have problems running the Norsk Modelljernbane rolling stock on Märklin tracks. This goes both for old M track and the new C track. My M track is not ideal but the C track is. On both layouts the NMJ rolling stock derails too often, and the Märklin stock never derails. Of course I try to fix the rail, and it helps. I only have this experience with wagons. 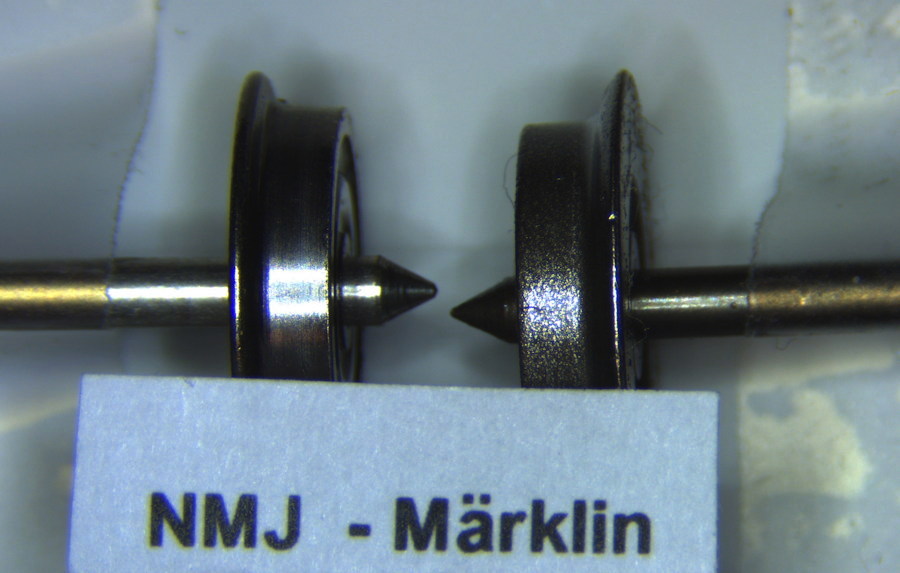 One hypothesis is that it may be the wheel’s flange that is the problem. So I took the above picture. The specialists in the forum thread (below) agree that the flange is part of the problem. 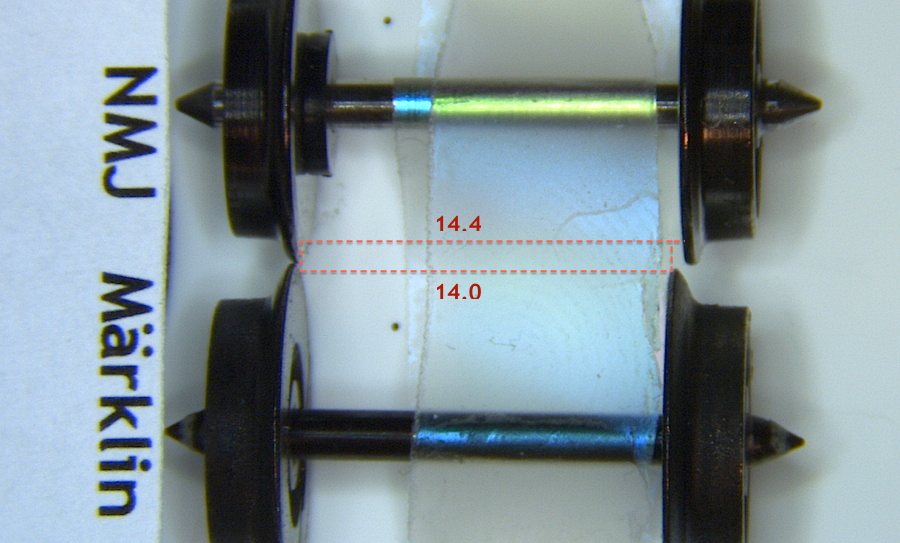 However, the long thread also says that it’s probably more the wider wheels. They say that according to a NEM standard [03] standard (which was new to me), the NEM 340
[01] defines that two rail track should be wider! And the NMJ rolling stock is made for them. The standard says 14.4-14.6 mm for two-rail and narrower 14.0 for Märklin 3-rail. These measures are called back-to-back. More about NEM norms at [02] and MOROP at [04].

So I need to push the NMJ wheels narrower by some 0.4 mm. Then my old 1960-1970 M track turnouts will probably be less of a hinder. And minute misalignments in the joints of the small radius industrial curves (5120, diam 61 cm) will hopefully not catch the wheel’s attention! Stay tuned!

These two wagons have almost similar fastening. NMJ to the left, Märklin to the right. How the wheels are fastened to the body is of course also important. But these two wagons are quite similar.

See how nice the wagons are! Of course an old SBB Ae 3/6 II #10460 from Märklin never pulled a Swedish wagon, but it’s nice to look at. This is my static display at work, nice to look at when I sit and code! Having them there keeps me from the annoyment of the wagons derailing! But I now will take them home and try to rectify:

Here we see my old Märklin M-track turnout. A Märklin wheel is seen. Here the NMJ wheels caught the center piece and derailed. But not after this exercise:

A vice, two nuts and a slide caliper – and about a half rotation of the vice! Viola – minus 0.4 mm! I still have to go over the layout with a pair of flat-nosed plyers to get the wagons to run smoothly, even if this is not necessary for the Märklin rolling stock. So the flange does make a difference.
Here is my layout, small – but as fun as my 1962 layout: 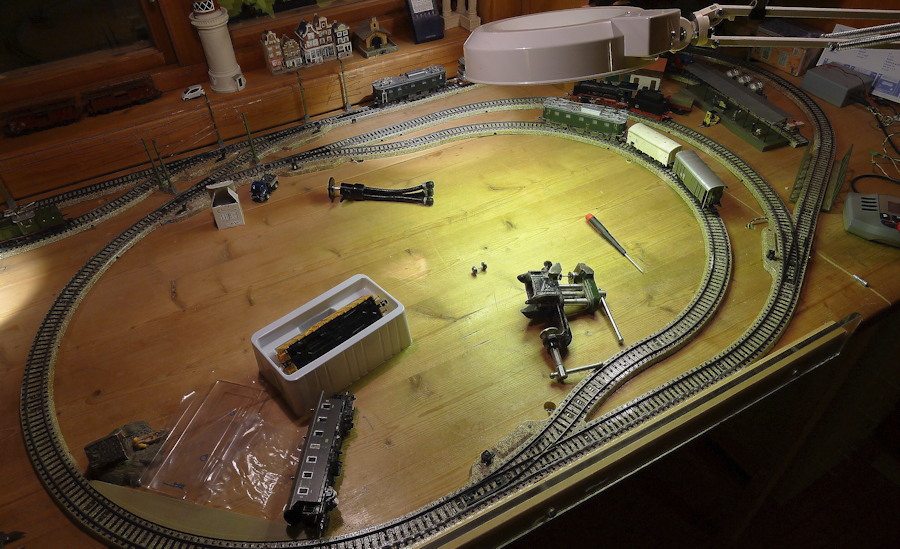 Finally, another matter: I noticed that I still had derailments – caused by NMJ and Märklin buffers being stucked in the industrial curve and then derailing when it came to the straight line. It seemed to be enough to introduce a Märklin wagon in front of the two NMJ wagons. Now, I have no derailments!

Jump to AC wheels at once. A smarter thing is to try to buy the rolling stock with “wheel set for AC operation” (A.C. or D.C. you know). Then you get both the flange and the width correct. I found some “wheels for DC operation” in one of my boxes. So I must have bought AC replacement wheels years ago, since some Roco wagons have correct wheel sets, not originally so, I read on the box. “DC wheels” will in addition be isolated, since it’s “two-rail” or “three-rail” that’s the real parameter for “DC” or “AC” in this case. When it comes to power technology, all are digital these days, completely removing the DC/AC as a parameter, but the naming sticks. Of course, Märklin 3-rail won’t need the wheel isolation. The NMJ solution is the AC wheel set, product NMJT9905 (here). However, I registered to get mailed when they arrived. After 2 months I gave up and tried the Roco AC wheels 40196 instead (here). They seem to work well. Update: Later on I did get a note about the NMJ AC wheels and ordered them. They work perfect or like they should! The peak-peak outer max width of the Roco wheels is some 2.47 cm, while the NMJ wheels are slightly narrower, say 2.45 cm. This was easily felt when I tried to push my two NMJ cars. I had to push the cars just some when they had Roco AC wheels, but they rolled with NMJ AC wheels. Simply because the latter have more space to spin freely. (Another matter, the NMJ wheels are rolling in a metal cup (brass?), while all the other cars I have, be it Märklin or Roco or Liliput would roll in plastic. I guess that the brass cups would certainly not want to be pushed by the wheels (they would just increase friction fast), they should just hold the wheels). Both Roco and NMJ AC wheels inside measure are 1.40 cm, as seen in the pictures above. Aside: here’s how to check whether you have AC or DC wheels on a car: use an Ohm meter and get the beep with the continuity check. For the AC wheels there should be electrical contact all over the axles. Hold one test pin on the axle and expect a beep on both wheels. These wheels would short a DC system immediately, so I guess having some AC wheel cars around if you have a DC system is not practically possible. The other way around is more usual than I thought. I had to buy 6 AC wheel pairs to rectify my system.

Here is a thread I started at the Norwegian Model Railway Forum (norskmjforum). The text above is a short summary of the very long thread. Let Google translate it here.  (More forums here). Thanks to all the writers!