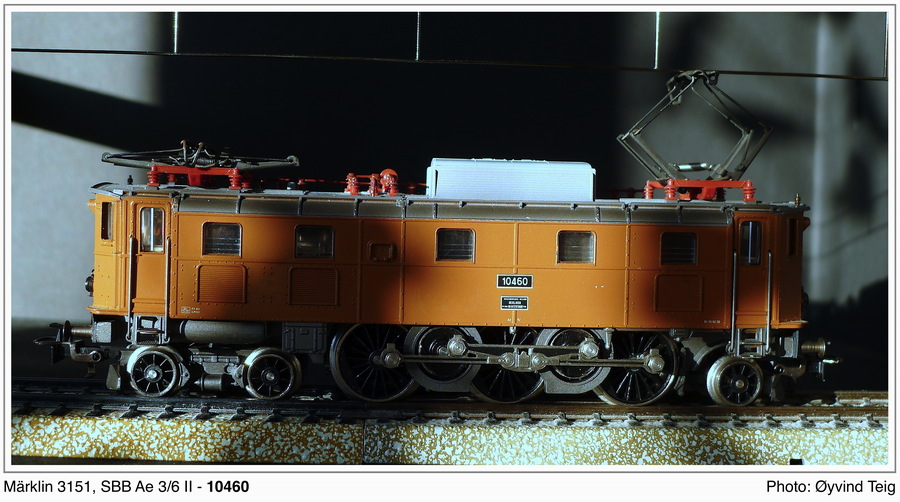 Please forgive, the picture above is not a non-Märklin SBB Ae 3/6 II. A fullpixel is here and its note is here.

Personally I have not found any Arnold, Bemo, Brawa, Fleischmann, Kleinbahn, Hag, Jouef, Kato / Hobbytrain and Lemke, LGB-Fahrzeuge, Lima, Piko Spielwaren or Rivarossi models of SBB Ae 3/6 II. Liliput is mentioned on this page, so do a search.

From Bockholt’s home page: “We use either steel or, for the small details, cast brass. All rod parts are milled out of solid steel, therefore they are much more rugged than comparable parts made of cast brass. The wheels of the locos are ring insulated, the tires are made of stainless steel.”

According to an email with them in June 2013 they have no locos left from the last (1997) production series. The picture on their web site is all there is of their SBB Ae 3/6 II. The site in Dassendorf has production only, no showroom – so these models may probably be studied at exhibitions only? A new model seems to cost €6000 – €15000, depending on how complex it is. I would guess this model is of medium complexity, since it has rods.

This description, along with pictures has been moved to my Gallerria Baumgartner note 142, here.

Update 12Jan2020: Spur1-Exklusiv (Spur1 Exklusiv ) in Germany (here) told me that the model’s weight is around 6 kg. I think his two models are seen at 17.37 minutes into a presentation of his shop and collection at YouTube (here) (lower center, brown and above it the green). There are also nice pictures of the green model (mixed with pictures of the steam engine Big Boy) (here). Somewhat aside: The Spur1 Exklusiv page also has a Pein Modelle tab (from the late Hans Dieter Pein’s brand Markscheffel & Lennarz by Mr. Lennarz in Hamburg, produced in Poland) and a reference to Fine Models (here). They are all under the Spur1 Exklusiv brand (according to mails with the owner).

I found something rather interesting at Christie’s. At this link I found the below description, with no attached picture. From the fleet number it looks like SBB Ae 3/6 II, but the scale is not displayed. Since I don’t know whether it is an H0 model, I have not included it in Table 1. By following a link at the page it looks like it was sold from something called Mariner Collection of Trains. I deduct it’s not a painting! Here from Christie’s sparse description:

These are all brass models. This model was produced by ATR Brass Models in Korea, who stopped their activities in 2007 (according to a mail with Lematec). The series below is from 2005. The web page to Lematec company ‘s “Lemaco prestige models SA” is www.lematec.ch/ (and this is obsoleted: www.lemacoprestigemodels.ch). Observe that the manufacturer uses “HO” (not “H0”) in their documents (Wiki). I have the 10439, there are a couple of new blog notes pointed to in that chapter (below).

Here is a google translate with a little help from me from German to English, from the documentation in the box:

I would add that it’s ok with the motor and that it can run, but that’s mostly usable for shooting pictures and positioning of the wheels. Friction is low since there of course are no o-rings on any of the wheels; also considering with the respectable 396 g force and spring-loaded axles. Pressing the loco on the house the effect if these spring-loaded axles is easily seen, and it’s nice to see how the individual rods would angle with each other. It looks realistic. (Again, see my movie there.) Driving is on the center axle; I don’t know if the rods would also transfer drive to the two other axles. It’s so tightly machined that I would not be surprised. The wheel’s flanges are probably also to scale and look small, I assume that’s part of reason for its large minimum curve.

As a true scale model this probably is a vitrine model, which is more than ok.

However, with analogue DC it starts to run at around 3 V and on my 90 cm track 5 V was all I could give it. But the lights are on even from 2 V, and they look very realistic by being incandescent and not LED. Direction-dependent lighting works from any voltage.

They are all listed in Table 1 here.

I bought one in St. Gallen in Switzerland in July 2014. 1675 CHF including 8% tax (not for me). It’s presented in the listed blog there and with extra pictures there.

These are all brass models. It looks to me like the H0 is a rather coarse model. Especially compared to the Lemaco models. But it does look nice!

Austrian company, model produced in Japan(?) I have seen them called “vitrine models”, to keep on display only? But they have a motor. I have not covered O scale models much.

Model Rail’s company website is http://www.modelrail.li. The company is located in Nendeln between Feldkirch and Vaduz in Liechtenstein, here. I had the pleasure of visiting them in July 2014, and I was allowed to hold their own SBB Ae 3/6 II and see it run! And take pictures that I am allowed to blog! The blog note is SBB Ae 3/6 II (1:45 by model rail ag).

These are scale 0 “1/45” gauge 22.2 mm models all made of brass and deatils with lost wax technique. I am not certain if the details are cast there since they state that on the company site that “The thus prepared data, e.g. for the production of the etching plates is then transferred directly via modem to the manufacturing plant.” (And I didn’t ask)

Roco’s company website is http://www.roco.cc. Why their url is .cc when they are a true Austrian company based in Salzburg, I don’t know. Their Wikipedia page is http://en.wikipedia.org/wiki/Roco.

I think that these are the only models in this note with plastic housing.

As always, “AC” means Märklin 3-rail (even if it’s 50 years since they had the centre pick-up element that looked like a third rail). Of course, Märklin did use AC (Alternating Current) for this. And “DC” means Roco (or other manufacturers’) 2-rail system without centre pick-up element, and powered with DC (Direct Current). Pick-up mehod (between rails and centre element / between rails only) and power type (AC / DC) in this case are historically related only. After the digital age, a train of pulses are best overlaid on a DC. But with the pulses, an AC component is introduced. So digital in a way is neither, or both.

Because of this, systems stemming from the DC tradition will have to have isolated wheels on all rolling stock, and making turning track is difficult, but the tracks are more realistically looking. AC needs no isolated wheels but instead a slider underneath the power consumer, makes easy turning track but the centre pickup dots aren’t like in the real world.

The first examination of my SBB Ae 3/6 II Roco model (Dec. 2012) gave me new insight. The outer circumference is of course made of steel, but the spikes are made of plastic. This makes it easy to isolate the wheels. Good for DC 2-rail – but the full metal Märklin wheels in my view  look nicer. Also, power is only supplied to one axle (the two others have no gears), whereas Märklin powers three axles. Only this single axle is all metal, whereas all the other axles seem to have a center plastic tube, isolating the wheels. Which is the basic isolation mechanism here?

The spikes in the wheels are plastic. As compared to the full metal Märklin wheels, the Roco wheels alse look plastic. When Roco made a 3-rail version they did not make full metal wheels. The 2-rail wheels also need copper current pick-ups, sliding on the wheels on the top. Of course, 2-rail is more difficult.

However, I have a feeling that it runs more smoothly with plastic spikes. Because it runs beautifully!

Another thing is that the buffers also are made of plastic. They are realistic, yes, but I must be very careful when lifting it out of the box. I’ll have to learn anew. Again, Märklin buffers are metal, sitting in metal.

It was presented (in Norwegian) in the magazine Modell & Elektronikk, 4.2019 pp 24-27 (paper only). Since I haven not received mine yet I have not been able to see how it runs in the curves. This new one has a simple frame with sideways movable axles, not the advanced extra axle that is in Roco 68402. See Curve overhang, at note 046.

I know nothing about this model except what it says on the blechundguss collector’s pages. It looks like a rather coarse model, but if it’s from around 1957 then that only makes it magic. Inside and some of the parts are Märklin but the exterior is brass. Swisstoys ia described at www.blechundguss.ch/236.html (translated). The company started in 1957 in Effretikon in Switzerland. The model shown above was purchased in 2014.

The German company Trix is owned by Märklin (Wikipedia), and the Märklin 3-rail AC models are in 2-rail DC versions sold under the Trix brand. Also an SBB Ae3/6 II:

I found this beautiful piece on Flickr. It’s built by Daniel Maurer, his photo album is called “Lego SBB Ae 3/6 II”. He tells it’s got a “PF XL Motor and PF Lights”.

After grandchild Isac (9) showed me some Lego track I found that it’s 38 mm inner width, which gives a track scale of 1435 mm (normal rail) / 38 ≈ 1:38. According to the Wikipedia article Lego Trains they “are at least 2 centimeters wider than O gauge trains”. It also says there that the gauge is called ‘L-gauge’ among fans.

Most “O gauges” are around 32 mm track and scale1:43.5. I guess, Lego has simply made the trains playable, scale and gauge becoming what must. Also detailing. Like, really, many other non-scale models. Where also most scaling-down ends up at. Should this detail be visible, and how much – if not exactly to scale?

Daniel answererd my query here that he created the SBB Ae 3/6 II “in a lego CAD program, called Lego Digital Designer. The program printed me the building instruction and I could order the bricks”. LDD has a Wiki-page at en.wikipedia.org/wiki/Lego_Digital_Designer. It sounds like ordering of the brick sets has been discontinued, but that they could of course be ordered individually(?)

There’s a Lego database at brickset.com/.

Combining a respect of their copyright and probable wish to sell magazines; here is a simplified list of the locomotives that I hadn’t already found when I bought the magazin. So, this is an excerpt from their list at page 110: “Die bekannten Modelle der Ae 3/6 II”.

I only list the 2C1 models. Models with wheels B or C from Märklin, ERNO, Kraft, BUCO, Liliput, MECANIC are early charming models. Also the 1C1 #11201 from Bockholt is not in my list. And some other rather peculiar models are not listed here. The magazin has pictures of most of them, catalogue, model build year and remarks. It lists altogether 50 models, as known in 2004.