This page is in group Hobby and is a follow up 12 years after when I finally had found a solution to avoid the sluggish and blocking movement of the wide drawer. Moved from https://www.teigfam.net/oyvind/hob/7/index.html on 22July2019 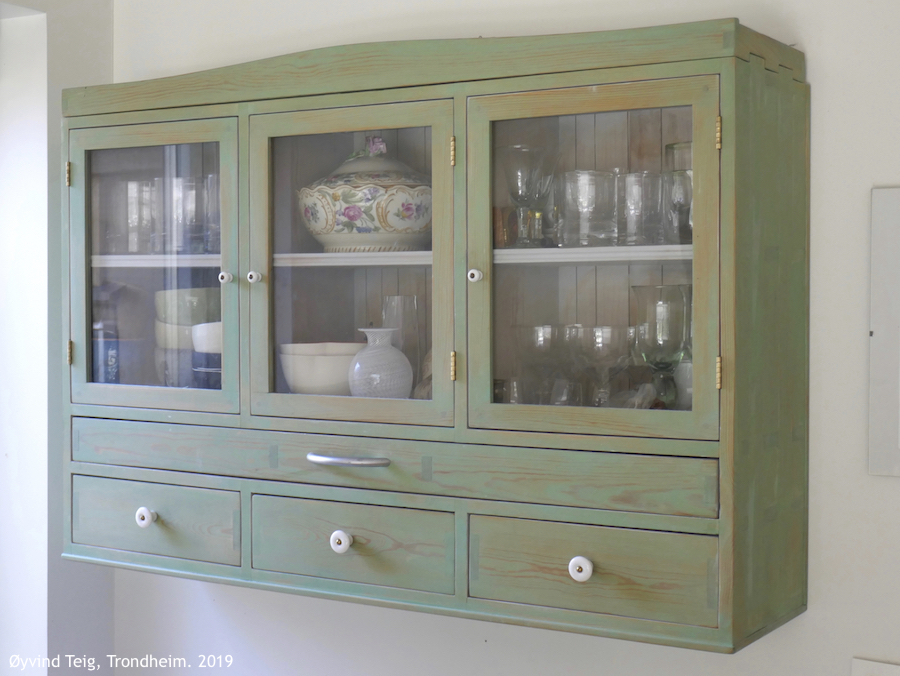 If a structure is part of itself, this vitrine cabinet is. It is a large set of lap joints. So, it is robust enough to carry its many faces.

This cabinet was built by 15 mm Norway spruce, layer by layer. I had not seen anything like it before, and I will repeat only when I have forgotten the struggles.

I had decided that I wanted the structure to show through the cabinet, top, bottom, sides – everywhere. I knew it was going to be painted with transparent paint, so I thought it would look nice. I started by making the first layer, with pieces equal to the width of the list, and ended with a layer with lap joints to half width. The last layer I did like this to make the front part more solid.

The finished hull needed more sanding than I had imagined because, in a basement shop, it’s difficult to exceed half a millimetre accuracy.

Then I decided to make the drawers and the top possible to use both ways – so they had to be symmetric in form. However, I wanted them to look different, so the joints were done differently (below, top). Then, when the “back” and the “front” were painted with different colours, the visual impressions became so different that it’s possible to see the cabinet faces not only as different, but one to like and one to, perhaps, set aside for a possible later need. Update: I had to sacrifice this for the wide drawer when the slot for the aluminium sliders were cut (below).

Changing the drawers from green to blue or vice versa requires a screw driver to move the knots. It is not as easy as with the top:

When the top is lifted, and set down again opposite, a straight line is changed for a slightly curved one. The face of the cabinet is once again changed.

However, should the owner want to see some change, also for the straight top, a round cylinder with a ball end may be pushed in or out.

Again, the owner decides how this cabinet would look.

The back of the cabinet consist of a panel that I cut to having a 2 mm groove.

The doors are shut closed with hidden neodyn magnets and small iron screws, one pair per door.

There is no mechanism to stop the drawers from falling out if pulled too far out; and the wide drawer needs two hands and some practice to get out of child safe mode!

The cabinet may also be used without the top. In that case, the top sides, squared, will be seen better. However, even with the top present, the castle in the cabinet is easily revealed.

Mari painted the cabinet with oil colour, and swept it off with a dry cloth after half an hour. (The colours in this page seem to be different in different browsers. I will try to fix it.)

Under the bottom there is a rectangular frame. This makes it possible not only to hang the cabinet on a wall, but to place it with a decent base on some other furniture. The front angles of this frame have been made so that, even at 45 degrees cut, much of the lists are lap joints (right, center). This should make the somewhat volatile corners more solid. And – much more fun to make.

I have estimated that the cabinet took about 120 hours to finish. Not including the half finished cabinet that I started, but made with too thick material, so that what seemed to appear on my bench was too much a distraction from what was in my head. And that one wasn’t “jointed” into itself.

No more sluggish movement of the wide drawer

Update July 2019: For twelve years I pondered over how to solve the problem with the wide drawer. It easily got locked to the sides, locked inside its space. I saw that in a very old corner cabinet that we have, a similar wide drawer only touched the front material; inside it was freely sliding on the bottom. No side walls. It’s sloppy but it doesn’t lock.

When I saw that I was successful with another cabinet (here) I thought that that solution could be used successfully here as well. It did! However, I had to sacrifice the possibility to switch front and rear by rotating the drawer and fasten the handle on the opposite side – one of the “many-faced” aspects.

Aside: I bought, but decided not to use, drawer runners. Simply because then they might easily become bent over a hundred years perspective. And if something bends that far away, who finds new or repairs them? Even over ten years I would fear this. And with the type I bought, the drawer could not be lifted out and placed on the table.

So I cut two slots in the bottom and made two aluminium sliders that I screwed to the bottom. I used a bit and a pair of pliers for the low height screwing. I had bored and filed long holes in the aluminium for the screws, so that I could adjust. I also made holes for small nails that I may use to lock the aluminium sliders. I guess the point is for the sides not to touch the cabinet; but it was rather easy to find the right position. With two sliders for this single drawer I was in full control, as long as the slots they were sliding in were at quite accurate 90 deg angle to the front. Some slack, like 1 mm, and the drawer runs like a dream! The point is that the sliders are placed symmetrically to the force from the handle but still is able to balance any uneven forces made from the contents of the drawer. Finally I made a loose veneer bottom to cover the slots.

Case (drawer) closed. (But even then silicon spray makes the wood to wood sliding of the bottom having much less friction.)

©2007 to 2019 – Original design and woodcraft by Øyvind Teig, Trondheim, Norway with reflected replies to “what do you think about this” questions from me, by my wife Mari. Thanks!

Please help me with the English terms here, I’m not a woodwork-English specialist!