New: 9Oct2016, updated 12Jun2018
This page is in group Technology even if it’s not very technological. But it may help you being technical (i.e. code without becoming annoyed) 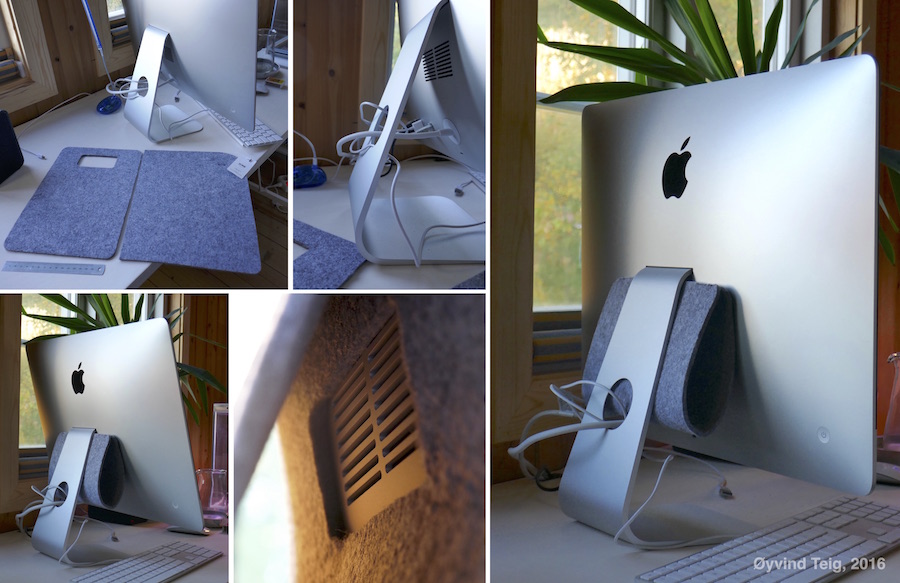 I installed smcFanControl (but you won’t need it) just to read the fan speed of my new 2016 iMac 21.5″ “retina” screen desktop machine (type iMac16,2). The speed was about 1200 RPM, which is the machine’s idle speed. Fine. So the noise I indeed could hear was as  designed by Apple. But I can’t place that machine under the table, can I…?

I am rather sensitive to this kind of noise. It didn’t sound like the sound of moving air; more like motor sound. It was just above the decibel level of the background noise in my own ears. But it was above.

At first I tried to use some thick felt I had in the foot, from the top, down to the cable and into the body, the size of the foot. It dampened the sound, but I thought I could try to do better. Maybe some sound still came out of the machine to the sides and was reflected by the desk and wall behind?

So I tried a kind of wider “tube” instead. I searched town and used the thickest and heaviest felt I could find, a placemat of 4 mm thickness. I cut an opening for the air and then I sowed the ends together at the top, to avoid sound from leaking up. Then just pushed the whole unit into the space above the cable. No need to fasten it.

I was surprised now to almost hear only the background noise. So it’s OK. Now I can code with ease, with no distraction from the Apple designers. I was actually surprised to learn that the fan was audible. But I guess it’s next to impossible to make it noiseless as long as the fan runs. It may be worse with the appearing sound if the fan were to start up from stand still. And the cooling design may not allow for no forced air. (Apple burnt their reputation once on passive cooling with the Power Mac G4 Cube.) Even my “silent” 2008 Mac Mini with CD drive that we have in the living room by the TV gives more noise at idle. (But I had to replace the fan a couple of years ago.) It’s just that my ears aren’t that close.

It feels like the iMac runs the fan at even lower speed when it’s idle. I can feel it on wet fingers.

For me, I don’t see it. Great! I fear that in an office they will laugh at you. But who laughs last, laughs best. I hope!

Disclaimer: you do this at your own risk. It may not work for you. Your machine may get overheated if the opening is cluttered; but then it should of course shut down. It doesn’t look (at iFixit, disclaimer: no ad, money or gift involved) that the body part that I am now covering with felt is part of a convection cooling scheme, since the fan seems to suck the air from the logic board directly. I haven’t noticed a higher temperature or fan speed as read by the smcFanControl.

(To install smcFanControl I also needed to install Homebrew and Cask, which were new to me. All described from from the https://www.eidac.de page. Disclaimer: no ad, money or gift involved. Just so that you can go directly there.)