This note is about a small loco that fits well in with my other Swiss electric locomotives with rods – like the SBB Ae 3/6 II and the SBB Seetal crocodile De 6/6. Also this present locomotive was made at Schweizerischen Lokomotiv- und Maschinenfabrik (SLM) in Winterthur in the nineteen-twenties. Nearly a hundred years ago. I didn’t plan for this loco, but the guy in a shop in Italy sensed my interests and caught me. The model was unused and second hand from 2011, that turned out to be a rather interesting eight year old buy. Thanks, Mari – who insisted to give it to me as a present! 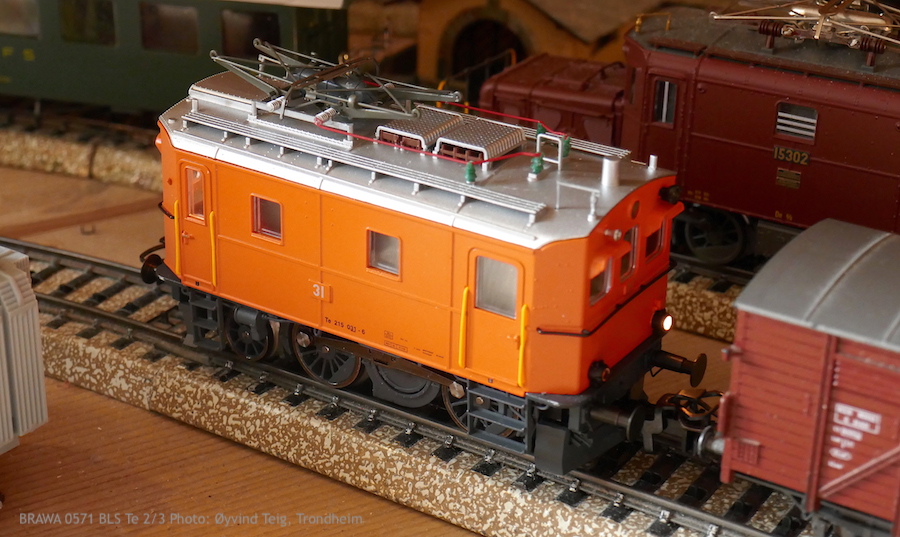 This is a lovely and pretty locomotive that is also very well made. It is so modest that I even kind of like it. It runs nicely with the motor, cogwheels and flywheel telling that even getting out of bed is really hard work – without digital sound. This is partly because there are no rubber tyres that would dampen the sound. The lack of tyres is such that I am not able to take it for a ride with more than a two-axle car, and not in an elevation, as it then simply spins. It’s closer to a scale model than some of my other models and therefore perhaps too fragile, compared. You can see by the pictures here that I like it!

Is there a discussion group or forum where questions about BRAWA models are discussed? The answer is no, but the guys at märklin-users.net (here) certainly are keen on this model, or maybe even BRAWA in general. Especially if the problems are associated with an AC version. See below, where I used this forum. Then I have found Moritz‘s blog Modellbauhütte where there are quite som interesting notes [2]. And the Swiss MoBa Forum, where there is a great thread about this loco started by Cebu Pacific [3]. There also is the Swiss HAG Forum, see [4]. 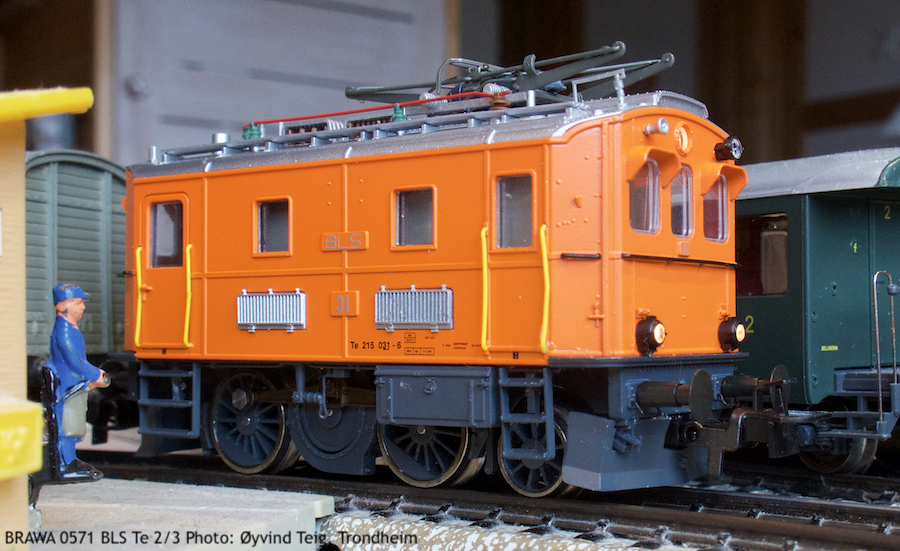 The built-in decoder understands “the old and the new Motorola data format”. The “new” is from 1993 and is called MM2 (Märklin Motorola 2) – also called “fx”. It’s also “fully programmable from the Delta system”. I think that for BRAWA they call it DIGITAL2.

However, I am not able to change from the default address 78. (So I modified my little Märklin steam engine’s address instead.) I use Märklin Mobile Station with SW 2.5. The description of how to do this in the manual that came in the box is rather strange to me. I don’t understand how to do it from this description:

Adjusting the address with the Märklin digital system

There is no traction tyre on any of the axles. (Tyre is used for a covering for a wheel, usually made of rubber. Tire is the preferred spelling in the U.S. and Canada. [here]). The loss of this rubber to increase the friction easily causes a load of a single, long passenger car with bogies, to have the loco spin. On a flat layout. A small box car is barely ok. Even running the loco alone, it is noticeable to see it spin somewhat. I use the old M-track, and I think they are really only tested for C and K tracks (ref BRAWA FAQ, here). However, I can not see that the track would make any difference on this matter.

I always try to figure out why something I find odd is like it is. Maybe it’s (A) because this model has only two driving axles (update: see Motor power) and to use one of them with its two wheels for it.. would not work? In case, why should that be a problem? The tyre is mounted inside a slot of each wheel and only barely touches the track. I can see that another BRAWA locomotive is indeed supplied with “wheel set prepared for traction tire AC” and of course the “traction tire for AC” itself (BR E77 0252, here). And that loco has two axles with traction tyres, one on each bogie. And each of the bogies do have only two driving axles. Or maybe it’s (B) because it’s rather heavy (208 g) so it should be ok without two tyred wheels? After all, to me it was rather surprising to see it slip. But then I haven’t seen a non-tyred locomotive ever. Or maybe it’s (C) because of its intended function as a rangier locomotive, with only few cars. No! They would typically need to push high start-up force for even quite large train sets. Or maybe it’s (D) really created for spending its life as a showcase model? No, not with engine, flywheel and dgital operation!

I fear that my model just has had little luck from its creation. Did its parents not really believe in this odd AC version and wanted it to slip behind..?

Another question is why the DC version does not need a traction tyre?

I queried about this at the marklin-users.net community, as I have found no BRAWA community: BRAWA 0571 has no traction tyre – A BRAWA question about a spinning loco. Unholz replied with a pointer to a guy who showed how he had milled a groove for a traction tire into the wheel surface. Also, there is a pointer there to some rubber stuff to paint on the wheel: Bullfrog Snot. Unholz says that “many users are not happy with the pulling power of this neat little loco.” Then using extra weight, magnets and adjusting the hot shoe are suggested. People have solved the traction problem! See Moritz’s comment (below) and [2] where he basically says that it’s the pickup shoe that is the major cause of the problem. Also search for “pickup” here.

Slipping to the rescue (1)

I cleaned the track with isopropanol! It was oilier than I thought! This helped quite a lot. With this done the loco could actually pull the long passenger car with bogies. Not without some slip, but most people may not notice I guess. But this is just a side point, the loco also needs 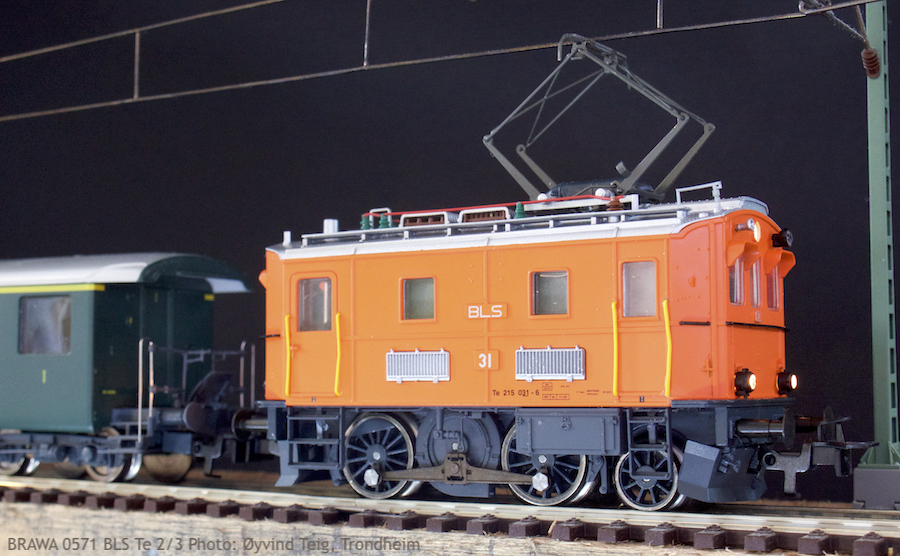 This model has the following text printed on each side. The bottom line shows the direction. I is the front part and is above the narrow ladder by the non driven axle. II is the reas part, and is above the wide ladder.

Details not in the manual 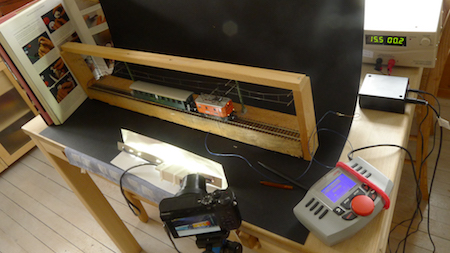 Fig.4 – Studio for shooting of Fig.3 (press for full pixel)

Fig.1 and Fig.2 are shot in the train layout. But since I don’t have catenary wires there, the above shows my kitchen table studio. The Panasonic Lumix DMC-TZ100 produced RW2 raw pictures for me. I set F-number to 8 for max depth view, and exposure time was then 1/8 sec. I opened them in GraphicConverter 10 and saved as TIF. I use macOS. Then Preview save to JPG max quality, to preserve as much of the loco’s text as possible. It’s alwasy difficult to be abe to see the wheels, but the LEDs behind a white paper helps. But then, that also distorts the colours somewhat. I tried to use Post Focus and slice the pictures in Pages (as I did here) – but this time the Fig.3 that goes out of focus actually looked better.

I used about the same procedure for Fig.2. But for Fig.1 I used auto mode and JPG in the camera. But no extra lighting for those two pictures, so the wheels are darker. Which is also ok.

I didn’t have an extra Märklin 6631 power for the Märklin 60116 digital connector box. (I did not want to disconnect units from the layout). But I had an extra 60116. It should have 18V, but 15.5V was ok, since that’s max from lab power. Also, the track are two-rail because it looks rather nice. I fed power through the wood to a point below the loco. Needed for the lights only.