My standard disclaimer says  that this is just for fun. There is no money, no gifts, no ads etc. Also, I have no association with any of the companies mentioned here.

Formally spoken I am not allowed to scan and publish this picture. And not allowed to publish the words. I think. Some times, when I ask for permission I would get no response. Not having said yea is also not having said nay. I guess, having removed the dust of a lost and found pearl isn’t that big an offense. Let this blog note be my Book Review praise of something praiseworthy.

All Trains to Stop

Almost forty years ago I borrowed All Trains to Stop with photos by Hans Steeneken at the library [1].

I have never forgotten this book. Therefore I wanted to have a refreshed look. What triggered this was that I had photographed two wretched Märklin model locomotives before I sold them as spare parts. I covered that in an earlier note, here. I thought, what will that All Trains to Stop book be like, for me, now? Will it still speak to me? It did.

There is a quick summary of its contents at a Customer Review at Amazon [2]:

Hans Steeneken is a Dutch railway photographer of the Colin Gifford / Jean-Michel Hartmann school of gritty realism. Ranging across western Europe, Steeneken’s photos record the end of steam in Britain, France and Germany, and the end of the railway infrastructure that accompanied it.

There is a Book Review by Andrew Marland with several pictures scanned. It even has some comments by the aging Hans Steeneken [4]. In the comment from 26May2010 Steeneken writes:

..Nevertheless, I’m pleased to hear that after thirty years some people are still looking at my photographs and find it necessary to comment on them.

Below I have scanned a single picture from the book (press it for higher resolution) and also Hans Steeneken’s Introduction and text below the picture on page 58. I hope Steeneken would have been just as pleased to see this picture here, still in need of comments.

The reason that I scanned this picture is that it tells so many stories to me. I have remembered the book since 1979. It’s about much more than decaying iron. This book should not dust away in a depot at a library, which is where they found it now.

All the words in the next chapter are by Hans Steeneken. Plus of course the magic photo: 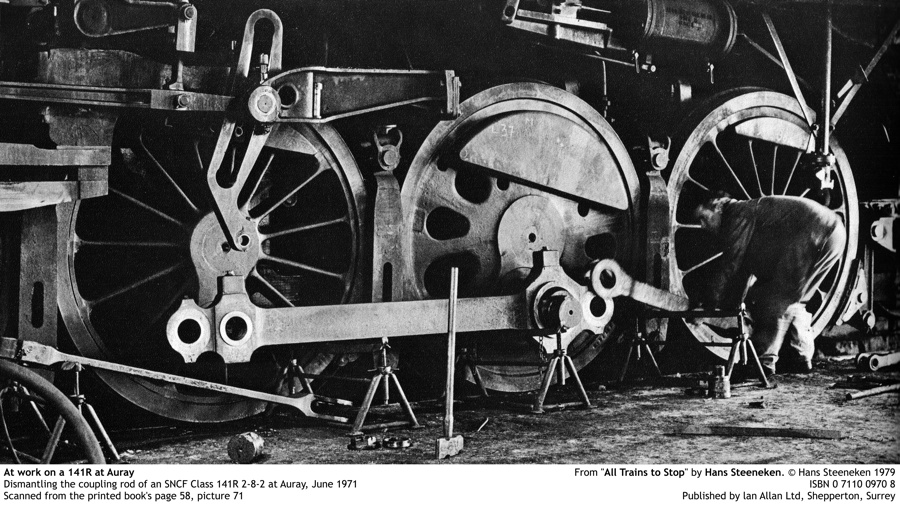 ”   Steam locomotives, heavy and ponderous as they might be, were very vulnerable when it came to the point of servicing. Keeping them on the road required constant examination and attendance. They needed their basic requirements, water and coal, but also facilities for lubricating and sanding, the disposal of ash, cleaning of the tubes, washing out of the boilers as well as installations and tools for the necessary repairs. This work was carried out by a well-ordered team of men; the cleaners, coalmen, fire droppers, shunters, turners, fitters, boilersmiths, brickarchmen, storekeepers, toolmen, clerks, foremen …

Work was hard in the shed and conditions far from ideal in the draughty roundhouses. It was a dirty job, one that was never ending, but one that was done!

”   The railways of today have two faces; the new and the old. One is represented by reinforced concrete, electronics and high speed trains; the other by east iron, semaphore signals and the steam locomotive. It was without doubt the steam locomotive that contributed most to the old face for she was not only proof of man’s engineering skill, she also stimulated the imagination of people to such a degree that those who have ever watched her in earnest know that it is hard to find a machine more fascinating and lively. Here was a visual expression of power, apparently derived directly from her predecessor, the workhorse. A mechanical ‘horse’, consuming tons of coal and water and belching out fire and smoke, she was the embodiment of brute force. And yet a ‘horse’ with habits and a behaviour too.

Although a creation of man and often built to the same plans and principles, steam engines were hardly ever alike. Each engine had her individual character and personality, and enginemen needed to be aware of this for to work them efficiently, every locomotive required her own way of handling. Some were impetuous, whilst others were heavy and ponderous and this sometimes led to the practice of crews being allocated to a particular locomotive, or developing their own favourites.

In repose a steam engine might seem quite unable to pull a heavy train out of a station and in her efforts to start, could be obstinate and slip, but once on the road she really came to life. Gathering speed her heartbeat increased and whilst her exhaust forced itself into the air, rods and levers mingled with the driving wheels in a turbulence of flashing steel.

An explosion of sound and power. Steam at its zenith. And when a day’s work had ended she was brought into her own intimate world, the engine shed. Here in an atmosphere filled with grime and smoke she was fed. Her fire was cleaned and after being checked and repaired, she was put to rest alongside her slumbering sisters to await the next turn of duty. Slowly her spirit died out, a few pipes and pumps percolating, till she was only quietly breathing, a whisp of steam on her safety-valve.

But those days are finished now. Like mammoths, mastodons and other prehistoric animals the steam locomotive belonged to a dying race, doomed to fall under man’s progress. Other forms of motive power made her dirty and uneconomical and her fate was inevitable. At the beginning of the 1960s wholesale destruction started and by 1970 they were virtually extinct. Thousands of engines have been withdrawn, and even those built in recent years have fallen prey to the cutting torch.

But that was not enough. The end of steam traction had made locomotive sheds and coal stages redundant, still further (what was called) rationalisation gave many other old and uneconomic looking objects a definite death blow. Hundreds of miles of track were abandoned and torn up, monumental stations were closed and numerous other things associated with the old railways fell into disgrace. Places became the scene of terrible dereliction and all too often it was not just the end of steam alone, it was for ever ‘all trains to stop’.

These are some of the facts which this book is about. Not untruths of engines ending up in a museum or on some preserved railway, but the reality of the daily workhorse that has passed without glory. To many people they were mainly a catalogue number, perhaps with some technical or historical significance. To others, however, they were the spirit, the vitality, the heart of the matter. They were a job of work,sometimes a job of sheer beauty, but mostly a hard and dirty one.

This book records something of this job. Her life in the sheds, her slogging hard for a living, her last limp to the scrapyard and her macabre death under the acetylene torch. But also it shows the emptiness of the haunted depots, the forgotten stations and the weed-grown tracks that remained where nothing was left but fading memories of yesterday.

This selection of photographs would not have been possible to make without the permission and assistance of officials, drivers and firemen and numerous others whom I had to call upon at times, and without whose help it would not have been accomplished. At this point I would also like to thank especially Wouter de Keizer of Haarlem, Holland and Tony Brown of St Boswells, Scotland for encouragement and support given in the past.