This blog note is in group Models and is about my experience with this locomotive. 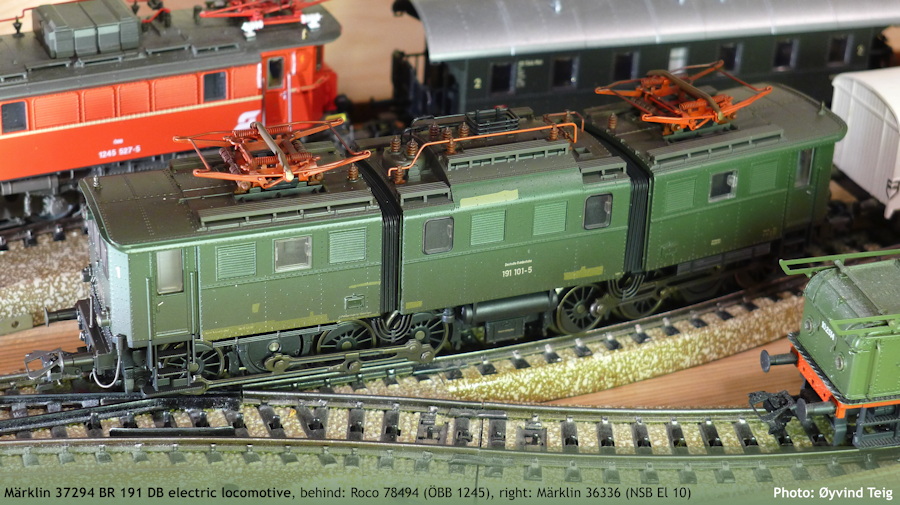 This is a very nice locomotive that runs in the curves and over the switches like a dream. I have a small layout with almost only curves, see here. I certainly enjoy electric locos. This one has had its diagonal side-rods produced around 1925 at Winterthur in Switzerland, just across the south border from Bavaria. Probably by Maschinenfabrik Oerlikon, but I haven’t seen this stated. As my favourite locomotive, which was altogether produced in by Oerlikon in Winterthur, the SBB Ae 3/6 II, see here.

Read about at DRG Class E 91 at Wikipedia here. The Märklin page is here.

I had to fasten one of the 2.5 mm nuts on the non-powered wheel set because it some times stopped against the ladder. Hmm, Märklin.. Now I have ordered a small toolset, the Märklin 70900.

Disclaimer: none of my blog notes has and ads, I get no money or gifts for it; it’s only a hobby.

In marklin-users.net community forum I queried about the Märklin 37294 sound volume, because I was not able to set the volume on my 60653 Mobile Station II. I think the answer was to upgrade it, because firmware 1.81 is reported to have some problems with MFX (see below). I also had problems configuring the Mobile Station with this loco’s functions, but it does do most of what it should. With firmware 1.3 at work it was almost impossible. It barely ran, and the loco was forgotten when I tried again.

February 2016: I opened the loco and soldered a 5 Ohm resistor in series with the 8 Ohm speaker to lower the volume some. Update 27Oct216: I unsoldered it when I got Mobile Station II 60657 with sw. 2.5. I then could set the volume to about 210 instead. See note Railway modeling scratchpad.

This chapter has been moved to Railway modelling scratchpad, chapter Mobile station boxes and firmware revisions

This loco has a awful sound with the clicking of the relays, switches and solenoid valves (?) that regulate the speed, pressure etc. inside. I also like the signal to noise ratio. I cant’ hear any digitalization noise. I think that is what the annoying extras of the Roco 78494 ÖBB Class 1245 are, which discloses this noise almost all the time. It’s especially easy to hear during on and off of the sound. The Roco has ok sound, but not as appalling as this sound.

I have queried about this at marklin-users.net community forum, see Märklin 37294 sound.