In San Gimignano in Tuscany, walking from the beautifully wrapped horror of the Collegiata di Santa Maria Assunta church (where, in order to receive the “free” audio guide I would have had to temporarily store my driver’s license in the ticket office; and where the guards inside did the single task to yell no photo! to those who raised their cameras; and where a banging door echoed through the church every time someone left) – after crossing a large staircase, two piazzas and then entering the beautiful Galleria Continua (free; allowed to take pictures and to publish them on the internet; and where the guards did have time for a chat – after they had pointed out the taped line on the floor in front of some art pieces on the wall) – stripped me from the provocations I felt in the church (I can see why they needed the beautiful Marias to compensate) to the mystery of myself being in the middle of my own senses.

Even if Anish Kapoor has said that “In dealing with the issue of the back of the cave, as I call it, one almost inevitably run up against religion”, the exhibit project Descension in the former cinema and theatre space took me to places where words, for a short time, were left behind. 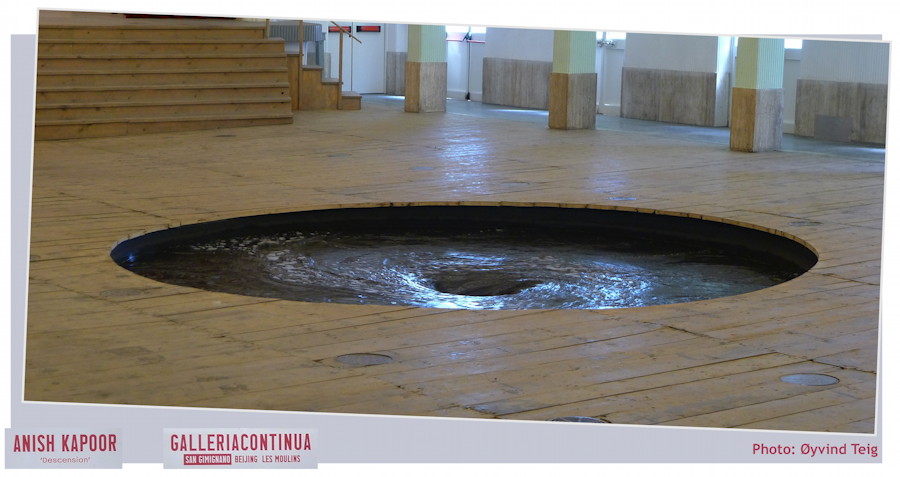 When I was little we had a bathtub. I remember the vortex and the sucking sound from the emptying tub. The vortex might develop after some time; it seemed to have its own life; it came from now and here and disappeared for nowhere. I could put my little finger into this inverted tornado. I was amazed.

I also remember the impression of the first trips to the cinema. When the movie passed over my head in the dust and then was instantly on the screen. The room was so large, the seats so deep, the sound so load.

But in the old cinema and theatre space in San Gimignano there were no seats. On the stage no silver screen. Only a black rectangle that Kapoor had placed there, with nothing to be shown. Framed in white.

Enough to stage my inner screen. And there was the action.

Just in front of me, in the wooden floor, a huge circular hole had been cut. Down in it black water growled around perpetually. A vortex would open in the whirlpool every now and then. From it came the sound from back home. Only newer. And loader, suitable for a movie theatre’s resonance. From the start of space; from the beginning of my time. No – our time. Our common time down there.

I could not put my finger in it. Not my arm.

And I could not jump into it. It was roaring and asking the hole in me to join. -Fit into me, the garbling roar endlessly begged. But I didn’t.

Kapoor was telling me something. I have seen rivers and waterfalls. But I have not stood on a cinema floor with a round hole of roaring water. This was cleaner, scarier and safer.

Still. What would happen if I fell in? If a boy came running across the floor and fell in? How fast would we have drowned? Would they be able to turn it off fast enough? The compressor in the garden for the air that created all this down there?

Since we were almost alone with the experience I wondered about the opposite. How would it have been if Kapoor moved this to a tube station in London? No trains on this track, only rotating water, with the roaring sound and the down-going tornado? Would it have felt more dangerous than what it replaced?

The fear in me. In us. That we try to control every day. 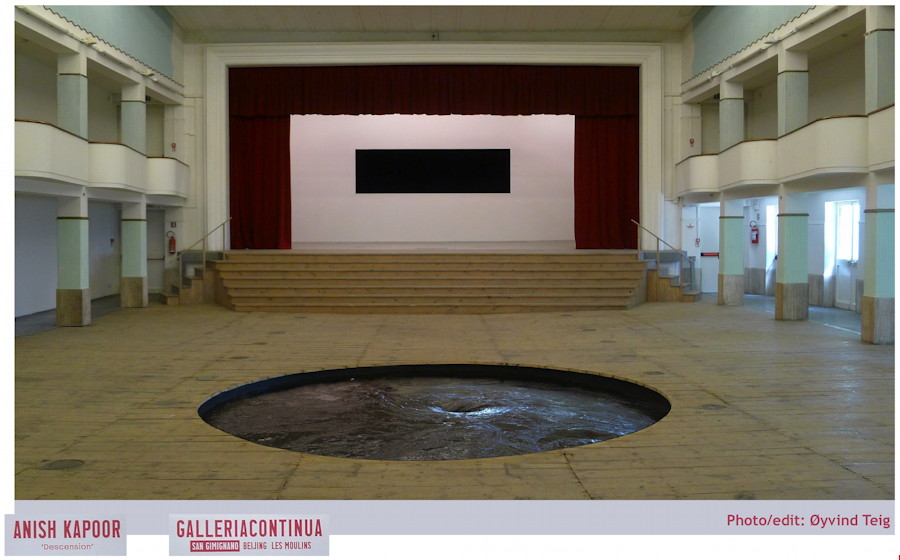 Also on holiday in San Gimignano.

When I asked the guards how deep the water was – I got an answer. They gave me words. Not the same depths, but the answer was not – that they did not know. Not that they perhaps thought it was very deep, indeed – but difficult to tell.

Perhaps I should not have asked and let the mystery be. But then, maybe the mystery was not this depth, but the depth of my initial experience. Which was deep but difficult to tell. Kapoor exposed it with an open tornado.

By the way. They had not taped a border or guard line around the water. The borders were mine. So also the guards. Without dogma.

When we revisited the same location in San Gimignano in 2017 there was another large-scale work of art there. LOST HORIZON II by Antony Gormley – with 4000 floor-to-roof silk-wrapped bungee lines, counting up to 21 km of rubber.

As an engineer I asked the guide how they had been able mount them since they seemed to be all in precise parallel. They had used a laser tool, of course.

The weight of the rubber plus the stretch from them, plus the weight of any number of persons holding a bouquet of lines in each hand doing falling-around exercises – had led them to mount a completely new roof. The roof of the old cinema would not have been strong enough.

Again, when I discovered that there were three thicknesses of the bungees I, as an engineer explained to my wife that this would make it easier to move through the structure covering the whole cinema floor plus the scene. Alas, it was not the correct answer..

The line from Anish Kapoor’s circular opening is still visible in the floor. I painted it red since I survived and stepped where the water once roared. The red line of a lost horizon: