For my wife and myself, the feelings for SanGimignano1300 started in May 2010. I then wrote a “love letter” called “A model to fulfil“.

Seen relocated in a small previous church in May 2014

If you read the next chapter first and then come back here you will appreciate that San Gimignano 1300 has been relocated and reassembled again! My wife and I were so happy to see this beautiful new exhibition in May 2014: 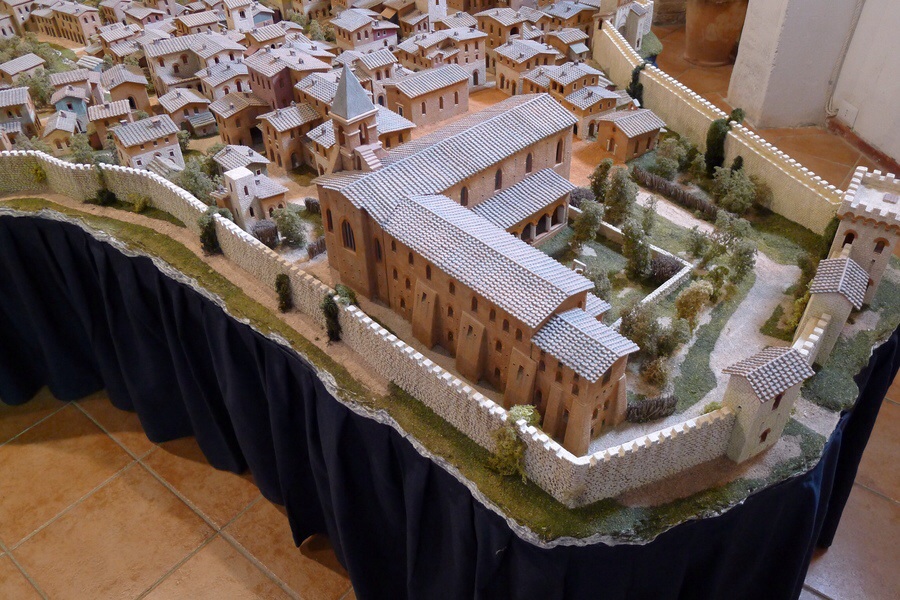 We certainly remember the arts and crafts shop that had been in this small church building some years ago, but since the shop moved the locality had been vacated.

The new location is a close walk from the original San Gimignano 1300 location, which also had the terrible back yard placement. They disassembled the city again (the base, into 22 pieces I was told by the staff), put all the houses in boxes and moved them up the steep street to the church. First they refurbished the internals of the building to fit the exhibition better. But only after months of waiting for approvals, needed for a listed building. Then they reassembled and rebuilt the badly broken base pieces and and brushed and painted the buildings’ colour, did gardens and lots of other detail. Much of this while they were open for the public to come and visit. Then, around May 2014 the new exhibition was finished.

The 1/100 scale layout weights about three tons, according to the staff. Remember all houses are ceramic.

The new location is smaller than the initial, so they have had to drop some of the larger dioramas of life in the Middle Ages. And the light that changed with sound according to a fast day/night cycle had to be dropped since this kind of installation is forbidden in a listed building. But the sun shins naturally through the windows, so this is easily forgotten.

When you see how beautiful it’s on the outside you can only imagine how it is behind these pretty walls: 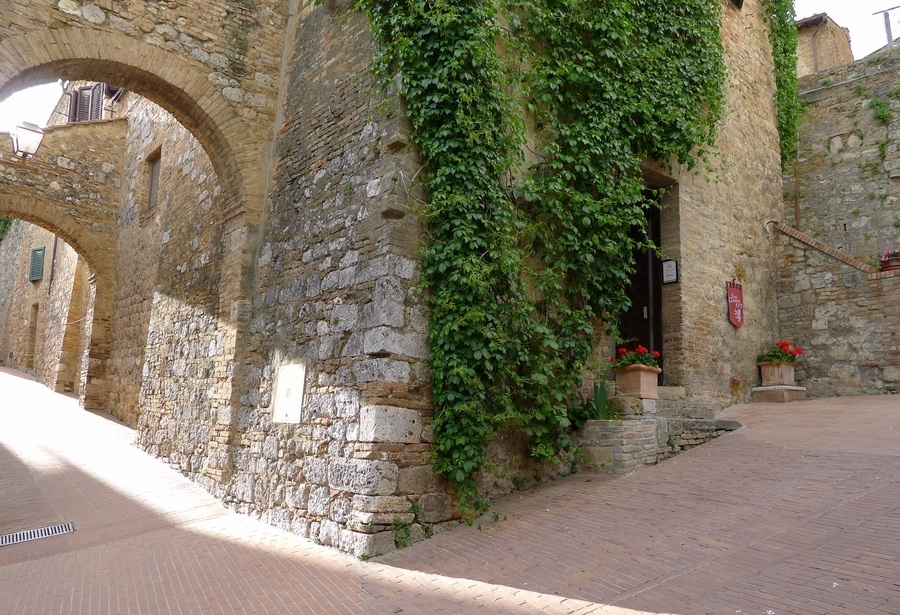 I asked the staff about the history of this church (they said it was somewhat too large to have been called a chapel). They had not found its name, but it seemed like it had belonged to the order of Frati Bastonati, who supposedly beat themselves. When it was abandoned, a flat was built on top of it, present today.

Now, look at another part of the beautiful layout. You can just about notice some repair of one of the roofs, in the year 1300. To me, this is pure peace of mind: 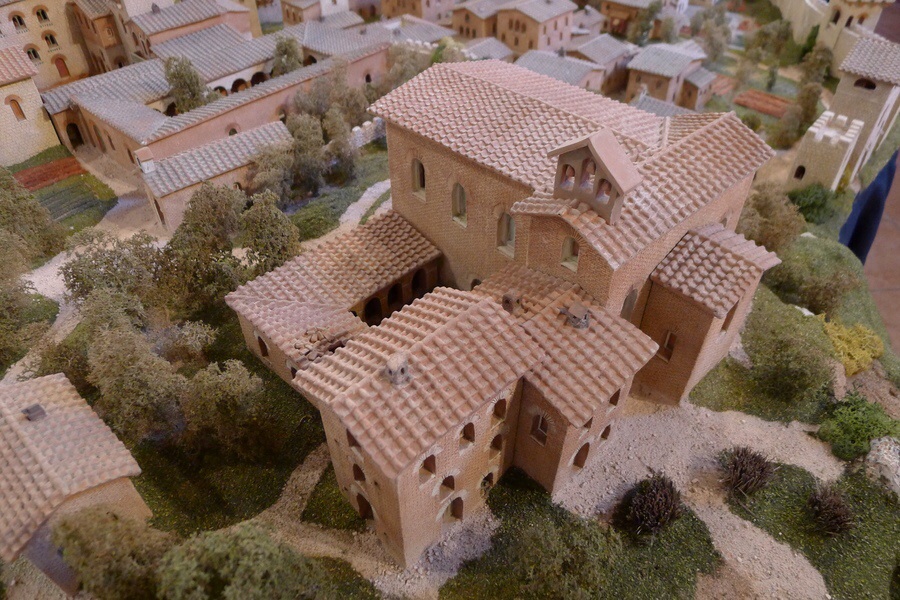 I have now updated on the English Wikipedia page.

YouTube: You may want to see my 2-3 minutes long still pictures movie “Sunrise in SanGimignano1300” before you read on, if you didn’t come from there just now!

In 2013 the main exhibition of the city was moved from the vacated vaulted ground floor up into the back yard. During the relocation the base had been cut into sectors. This has led to visible damage to the base. The model city is exposed to the sun and rain, but during heavy rain it is being covered with a large foil. It is also unprotected from possible wear from the public during opening hours. The main shop has also been moved into an adjacent part of the museum, where SanGimignano1300 also earlier had space. Entrance is now free, but boxes for donations are present. The SanGimignano1300 English home page seems not to have been updated with this information. [Wikipedia, 4June2013, text by me]

It seems like SanGimignano1300 in the spring of 2013 is having hard times. As mentioned in the article the city is exposed to public, sun and rain (if not covered), outside in the back yard. As seen by a yearly May visitor (me), the change leaves room for worry of the fate of these pieces of art. Øyvind Teig (talk) 06:57, 22 May 2013 (UTC) [Wikipedia talk page, 4June2013, comment by me] 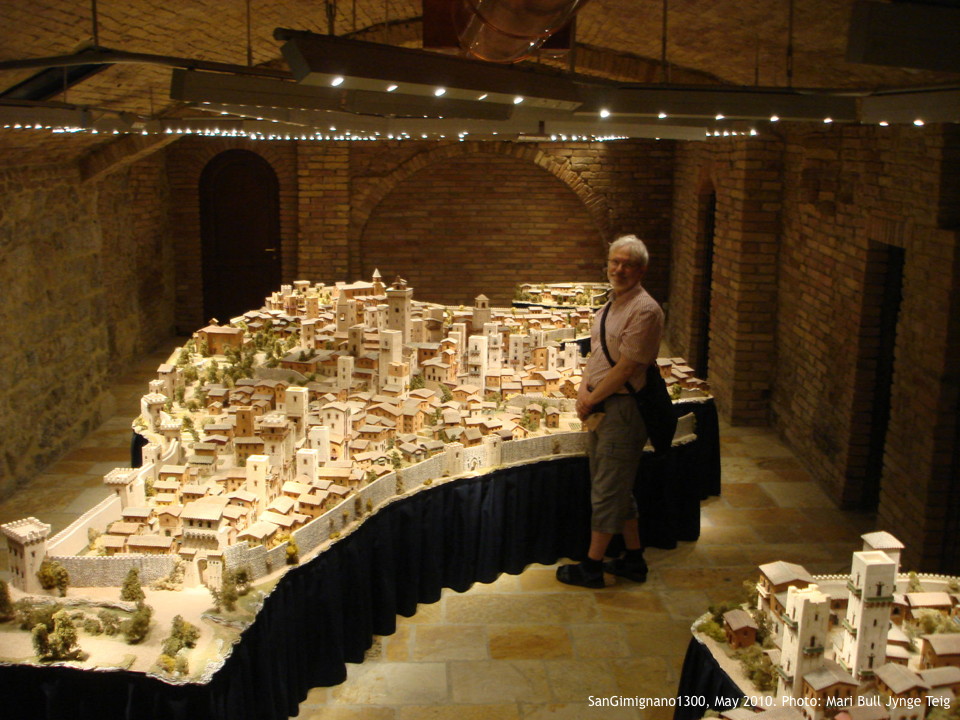 This is me down in the vaulted cellar in May 2010. Read about how this was built at SanGimignano1300’s home page.

Now I turn to the May 2013 pictures. I will let them mostly speak for themselves: 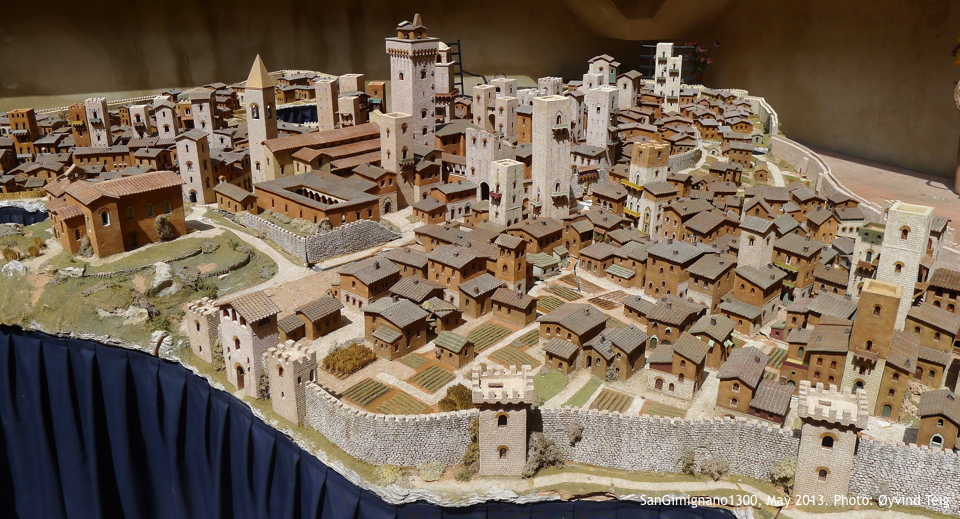 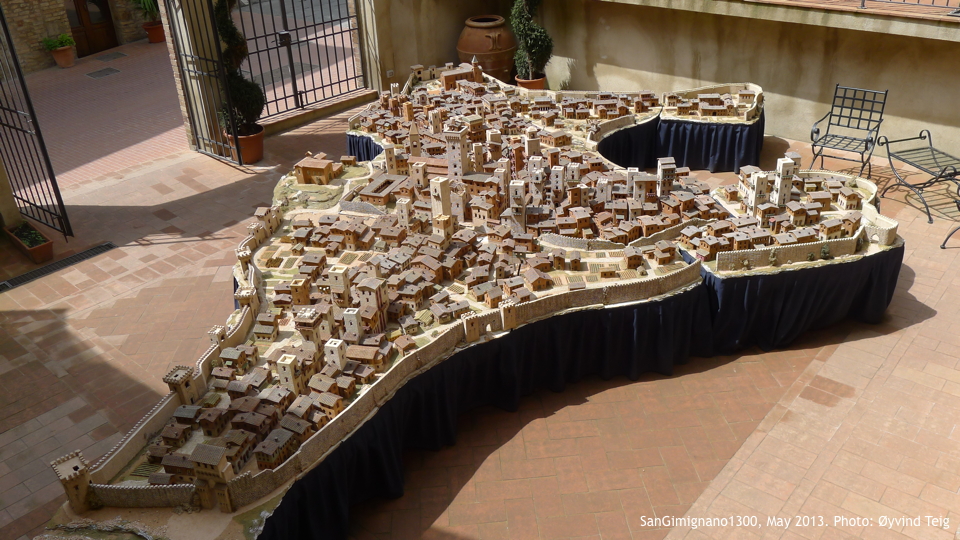 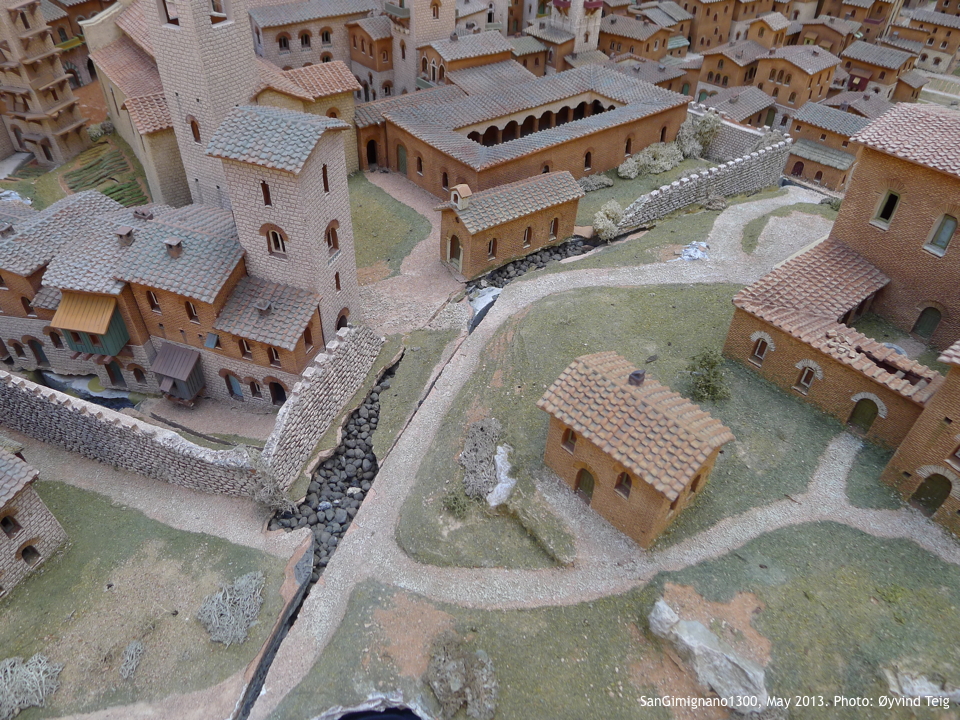 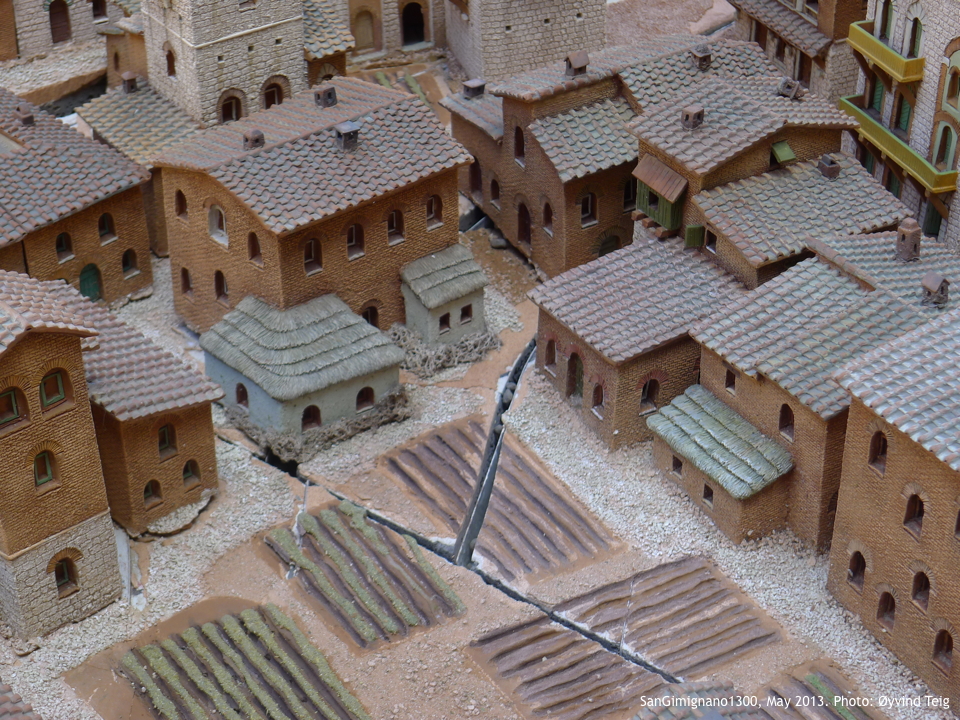 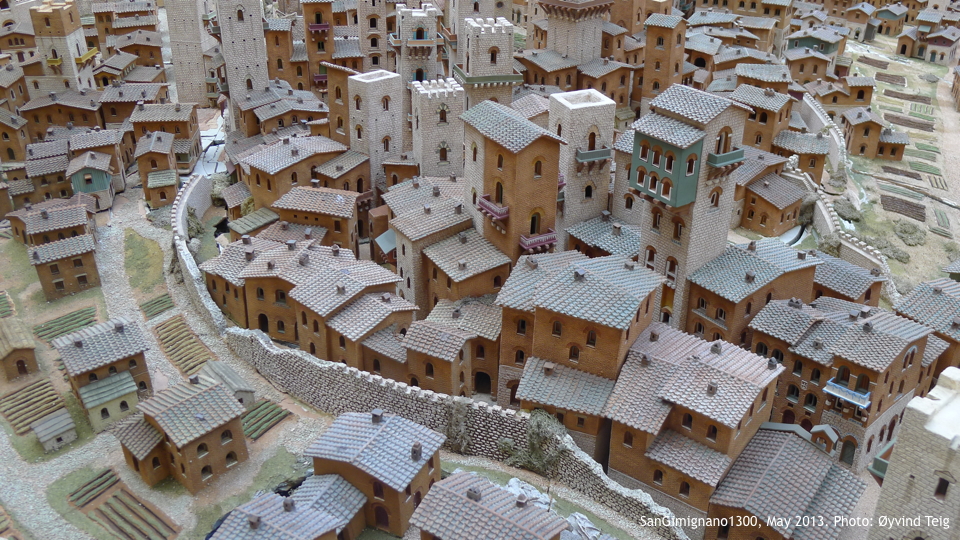 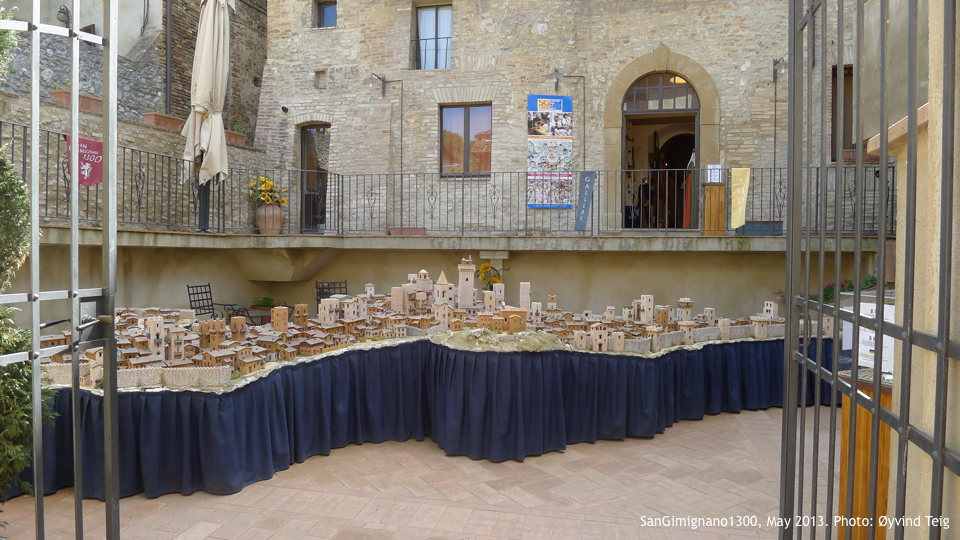 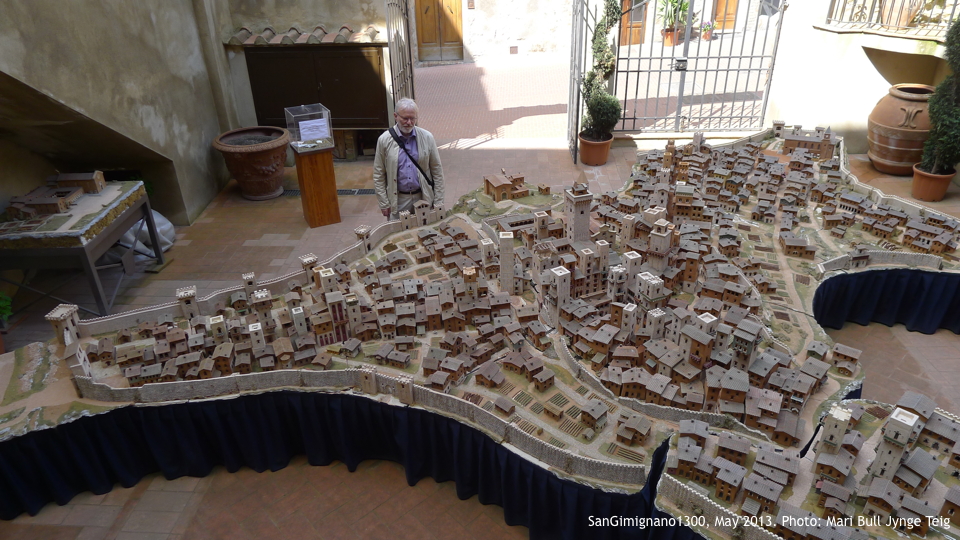 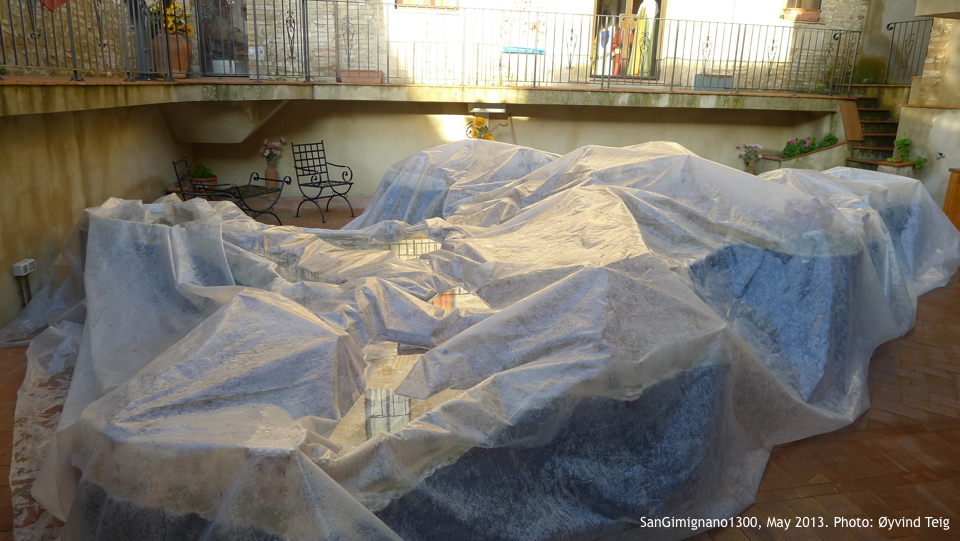 After a rain shower we saw that they had covered the city with plastic. It’s full of small seas! What happens when the plastic breaks or when they remove it, with the water, the houses and the plastic? Another day, with less rain – it was not covered, but still wet. The ceramic houses are painted with oil paint I believe. Sad, so sad. 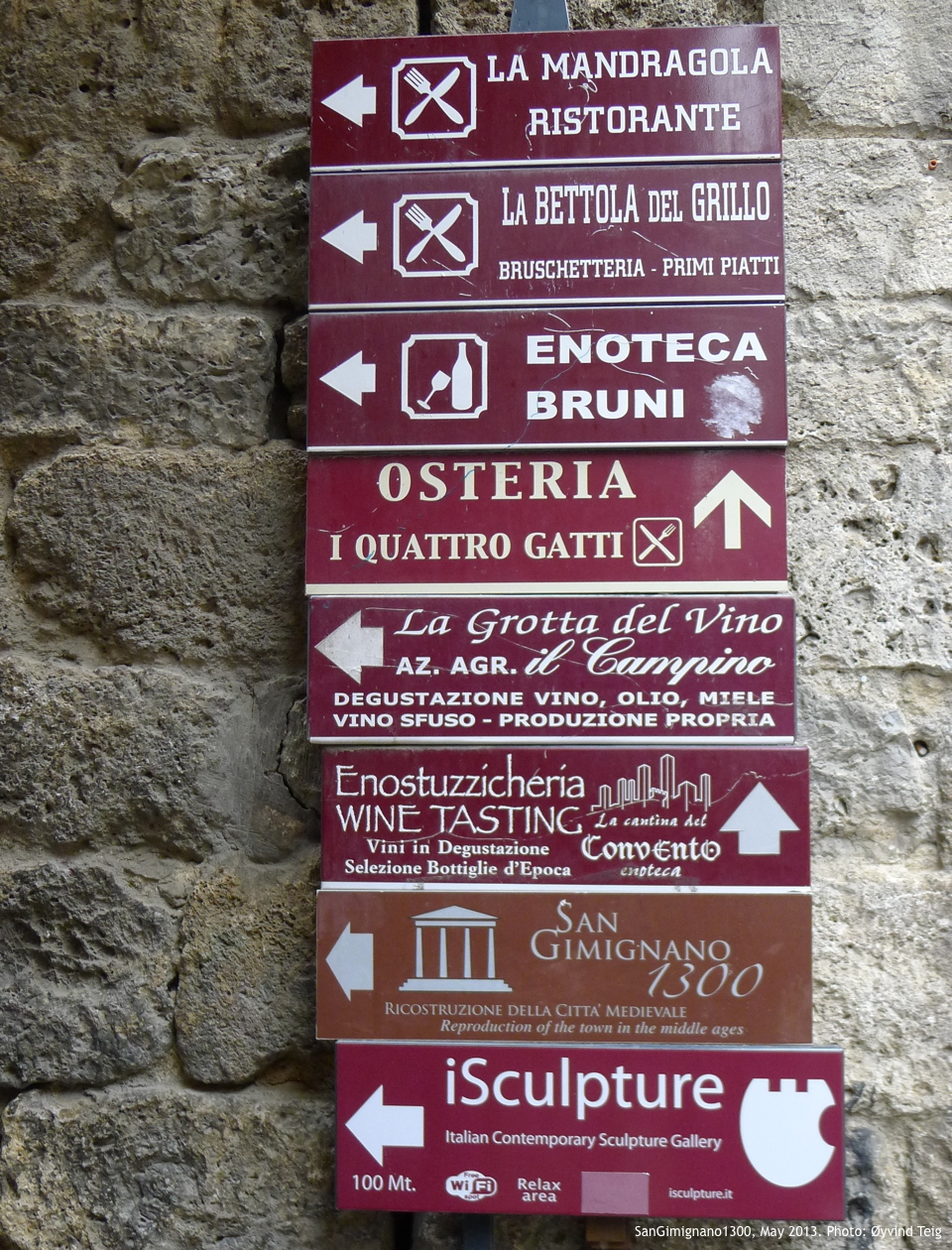 This group of signs leads you to the SanGimignano1300 exhibition, as well as to the iSculpture art shop, now residing in SanGimignano1300’s old shop. (Observe that since the new location in 2014 the ‘1300 is gone. It could reappear since it’s now only a right turn and up the hill instead of a left turn at the end of the road.)

Disclaimer: I have not asked SanGimignano1300 for permission to publish this text and pictures, nor have they asked me.