The following blogs have now been parked. All updating of the themes will happen here. 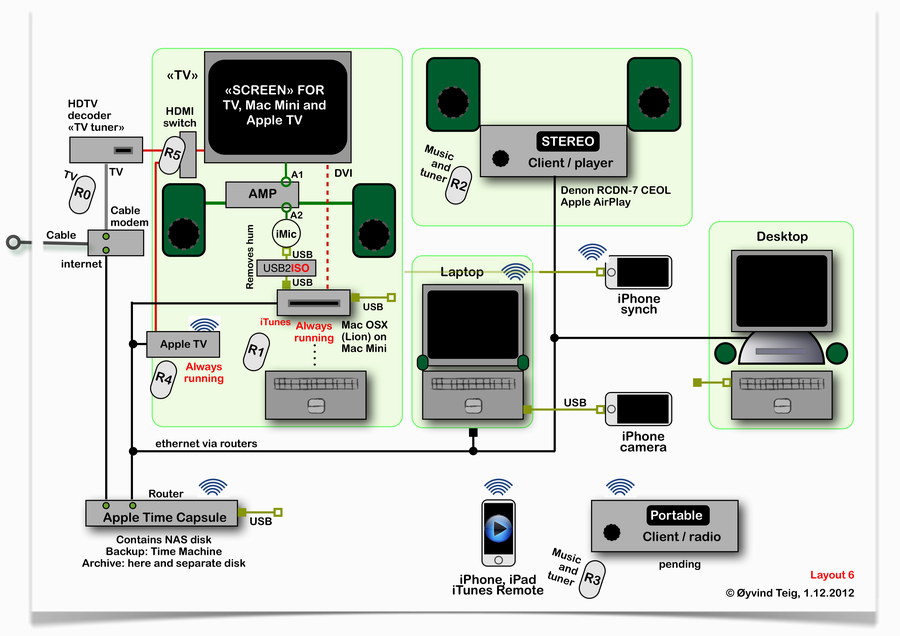 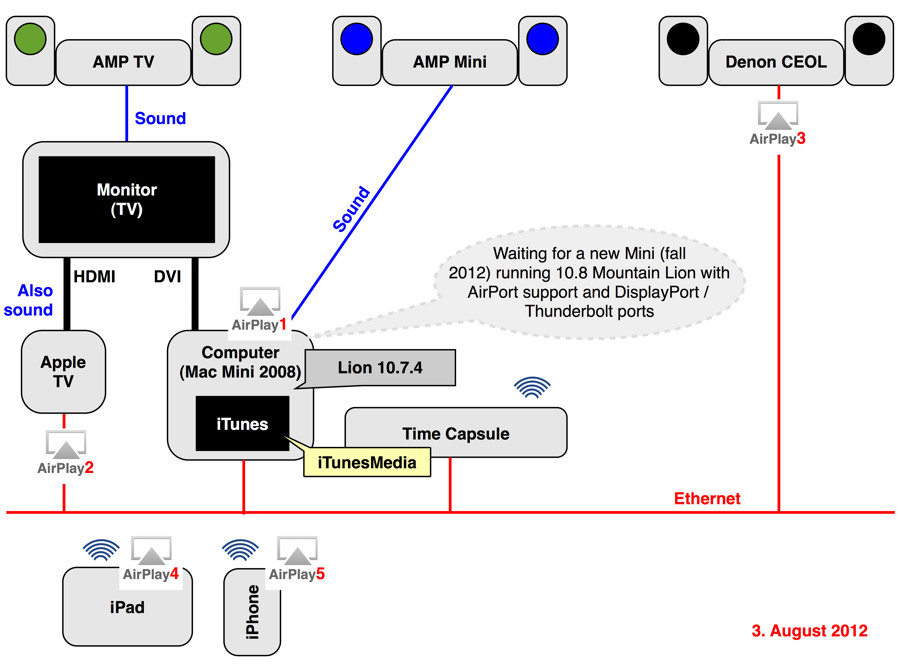 The architecture has been well described in 027.

This has been described in 019.  I haved now dropped it – and introduced hum – and removed the hum (see below). The main reason is that it was too complicated to take the TV sound through a sw component in the Mac. More than once the JackOSX stopped and the TV sound was gone, I had a feeling that it wasn’t stable enough. I could restart JackOSX, but not my wife. So she had to unplug the cable in the TV set, leaving her with bad plastic audio.

When I connected two cables to AMP (this fig.1, see here), I got noticable hum. There was a ground loop there. The sound cable from the TV (and then also Apple TV) was at input A1, the sound from iTunes on the Mini at input A2. Input A1 is constantly connected because of the TV.

This hum is of course a side effect of not running the JackOSX, which only used input A1 (see chapter above).

I  have an iMic D/A (user line analogue output) and A/D (user microphone/line analogue input) from Griffin Technology, a good friend for 10 years (it’s from 2002!). The iMic still exists. The one I have did not remove the hum. So it doesn’t have galvanic isolation.

Then I discovered the USB2ISO USB 2.0 isolater, see here. I mailed with electronics-shop.dk and they confirm that hum will be removed if in addition the DAC did not have an external power, which could easily reintroduce hum. The iMic doesn’t, it runs directly powered from the USB cable. And even my old iMic is 12Mbit/s, a requirement stated as necessary in the mail reply.

I now have an USB2ISO which has galvanic isolation of the USB and then the iMic and then its output connected to A2. It works perfectly, and there is no hum! But I needed to plug the USB2ISO directly into the Mac Mini, a cable caused the iMic to pick up new noise. I could hear some noise that sounded like a power regulator, the USB2ISO must have one.

The USB2ISO is based on Analog Devices ADuM4160 (data sheet). It adds jitter and propagation delay to the signals comparable to a hub and cable. So my AirPlay units playing in phase is kept.

Some even better solutions could have been to have a D/A with galvanic isolation in one piece, or a new AMP with both 3.5 mm line input and TOSLINK input, like the the Audyssey media speaker, see here.

Sept2015: Adafruit USB isolator http://www.adafruit.com/products/2107 should also be fine. The two products use the same Analog Devices USB isolator chip. But the the Adafruit unit uses the Analog Devices UM5000W isolated power (that I can’t find on the net) that Adafruit says delivers 100 mA, while the USB2ISO uses a “High Grade Class 3 Isolated Power Supply” that is stated to deliver 400 mA.