This blog note is in group Models

In this short blog note I will discuss a matter I have only just realised: modern model train catenary wires don’t need to carry electricity. And they haven’t needed that for quite some years. I have just lagged behind. But then it’s only recently that I have had any digital locos, and recently that I have again had a model train “period”. It’ been on and off for years. 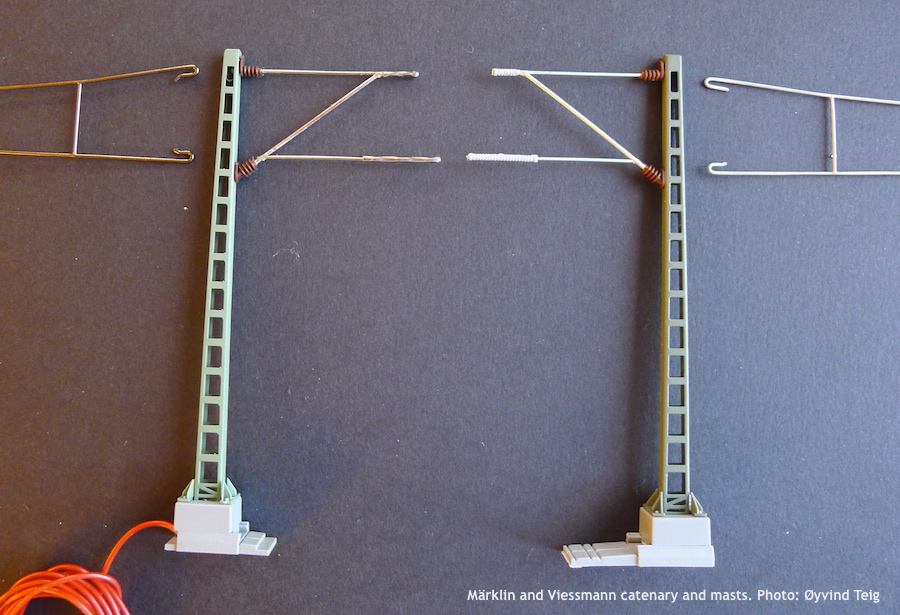 It started this Christmas when some of my adult children gave me a box of Viessmann catenary. The wires are of metal and may carry electricity, but the connection points on the masts are isolated (plastic, right, figure above). This means that having one wire connect to the other is not very feasible. But the man in the shop had said it was compatible with Märklin catenary. The previous Christmas I had got Märklin catenary, which certainly is electrically functional (soldered, left, figure above). But I hadn’t started mounting them.

The Viessmann box [01] did not contain any feeder mast with a cable. When I studied my only non-Märklin loco, the Roco SBB Ae 3/6 II, I saw that the pantographs could not pick up any power from overhead. No internal wiring. They were just for the looks. No functional catenary system at all. Same story for the new Fleischmann 392571 electric locomotive series 141, DB AG (of which I envy all owners).

Even if it’s outside the scope of this note: I use old Märklin M-tracks for this small layout, as I am reusing my tracks from the sixties, seventies and eighties. I don’t plan to take this layout to a system controlled from a computer or app with feedback from the rail. I have read that M-track and feedback do not match well.

Viessmann do have something they call a Y-link [02] that electrically connects two catenary wires. But they are extra and I don’t look nice (unless they really exist). And Viessmann also sell feeder masts with cable [03]. Viessmann’s plastic isolation on the mast catenary connecting rods probably clip the catenary better to the rod than the Märklin soldered rods. Märklin certainly has a different specification supplied to their manufacturer: Viessmann(?)

And mine: I grew up in the fifties in service housing by a transformer substation. My father worked there. My grandfather worked with electricity. It was 1960 when I first longed for this catenary, so it’s been a dream for 50+ years. In my head it’s always carried power. I have four Märklin old analogue AC electric locos with pantographs. I have just pensioned my blue transformer and bought a new gray trafo.

Of course my digital locos don’t need more than one (combined communication and) power source. The rails are best since they are always present. Any catenary don’t need to be more than for the looks, to trick the modeler.

There are other illusions: steam engines don’t run off coal, diesel-electrical don’t run off diesel – but they seem to. And now, electric locos don’t run off electricity from above. Why should I accept the two illusions, but not the last? It’s not logical.

Wait a minute, maybe I could have AC between the catenary wire and the rails, and digital between the centre studs and the rails? I think this was suggested early on, but it’s been adviced against because a broken catenary wire may feed AC into the digital power and control centre studs and break the digital driver electronics. It could easily be designed to withstand such a surge, but I don’t know if it has [04].

Power in the overhead wires would at least make it possible to run non-converted electrical analogue locos with pantograph together with the digital locos. Or several if I also let my old signals only work with the catenary.

Sure I am arguing in cirle here.  Anyway, now I will at least be able run two systems. For the looks only, I wouldn’t. And isn’t one illusion better than the loss of two? Thanks, Märklin, for making this possible. I will build a small functional catenary system and supply it with AC when I want mixed driving.

There is a reason for everything. A colleague at work told me that 2-rail systems have little tradition for power in the catenary, since it’s not clearly defined whether there should be plus or minus in the wire. At a loop joining point the reference voltage changes, so should the voltage in the catenary also. For Märklin it’s always been the rail centre that matched the catenary wire.

But I have dropped the metal bases for pieces I cut from a 5 mm thick plastic chopping board. They are of the same size as the mast pistioning jigs, with a hole in the same place. 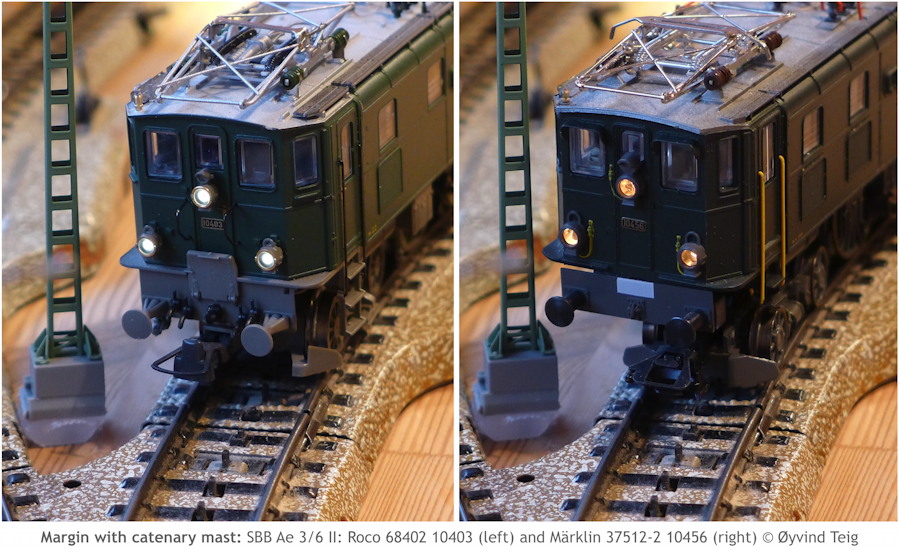 After a while I saw that some of the locos were halted by a catenary mast. This was in an outer curve on a track that the locos seldom rode on. On the picture I have fixed and added a 1 cm long piece of track to add distance (to the left, barely visible). So be sure to check every possible piece of track, both directions, with every piece of rolling stock – during construction! See here for a discription of the differences of the two locos in the picture.

I am rounding off with a picture of some real life catenary adjustment. Service personnel installing new catenary on the Trondheim Central railway station in February 2014. Observe cable alignment measuring. Cable has been coloured red by me: 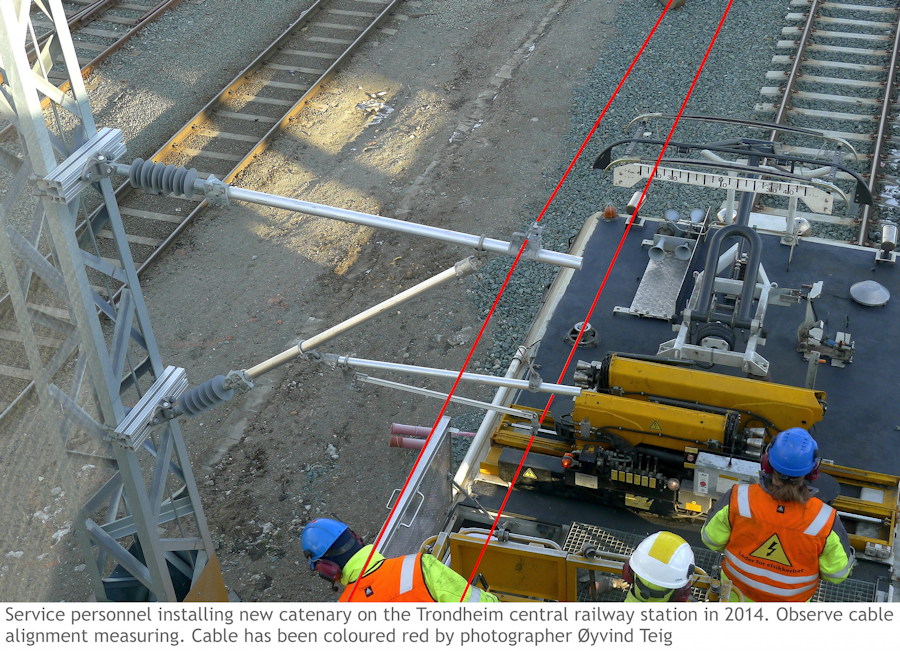