I had the pleasure of boarding the Embraer 190 (or just E190) machine ready for flight KL 1177 for Trondheim on 27Aug2014. Nice leather seats with ample space for the legs. The literals EZA-224 was on the doors covering the front wheel; I think this is what they call fleet number. The flight was operated by KLM Cityhopper. I think this is the machine.

I was sitting in the back of the plane when I noticed a service man arriving with a stepladder and an instrument. Then there were three men there. I shot this picture, but I have replaced the heads/faces with pixels from the wing: 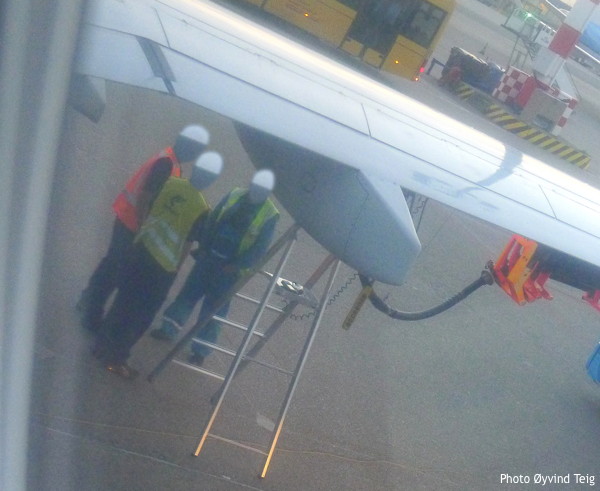 After some minutes the captain (I think) announced that there was a problem with a valve, needed for fuelling. He said that they did not think there was a problem with the valve itself, but with the computer. He then said that they would reset it. During the reset all cabin light would go off and it would take some minutes (3-4 I think he said) before they would come alive again. It appeared to be a matter concerning the whole machine.

During this it looked like the service men’s body language became more relaxed. When the lights came on again the captain said that the reset had indeed fixed the problem.

We were about half an hour’s late on landing in Trondheim, since we obviously went late from Schiphol. As a professional computer coder of safety critical system I had a lot to think about during that flight. Like whether the valve’s computer was a vital computer. But then, if it weren’t, why did they have to restart the whole airplane?

And to be polemic: what’s the procedure for resetting the plane during flight?

While this incidence might look serious, it may not (and perhaps shall not) make it to the headlines. Safety is about risk. Risk is probability of occurrence multiplied by consequence. It is never zero, not even in avionics. This is acknowledged in the requirements. KLM Cityhopper did this in openness, which was good. We knew what was happening. This incidence will of course get into the logs and thus be reported, as required in the books. But as a passenger it was a reminder that risk is never zero.

I have reported this blog note through the web based KLM Customer Satisfactions questionary by KLM Customer Insight and TNS NIPO on 29Aug2014.

Please mail me for comments. I would publish here if you want to.

Update 24Feb2020. Looking this over, caused by another not-fatal incident a person told me about, below is the response I got from the Civil Aviation Authority Norway (CAA – Norway):

Thank you for the E-mail of 4th September, 2014. However it does not concern the CAA – Norway because the occurrence happened in Netherland. You may report that to the CAA – Netherland. If you need further information please do not hesitate to contact us.

I did not take it any further, since I assumed it had been reported by KLM.