This note follows up the Have ePub, need mobi from 2013, five years later. This page is in group Publishing.

The book I produced was Slappe observasjoner. Even if the text is in Norwegian you may still want to try out some downloads to view the results from there. There would be PDF (equal to the paper book), ePub (page layout, also equal to the paper book) and the .mobi that Amazon requires for the Kindle readers. However, the sources and the exported ePub used as input to the mobi-converter I have not published. Here’s the front page: 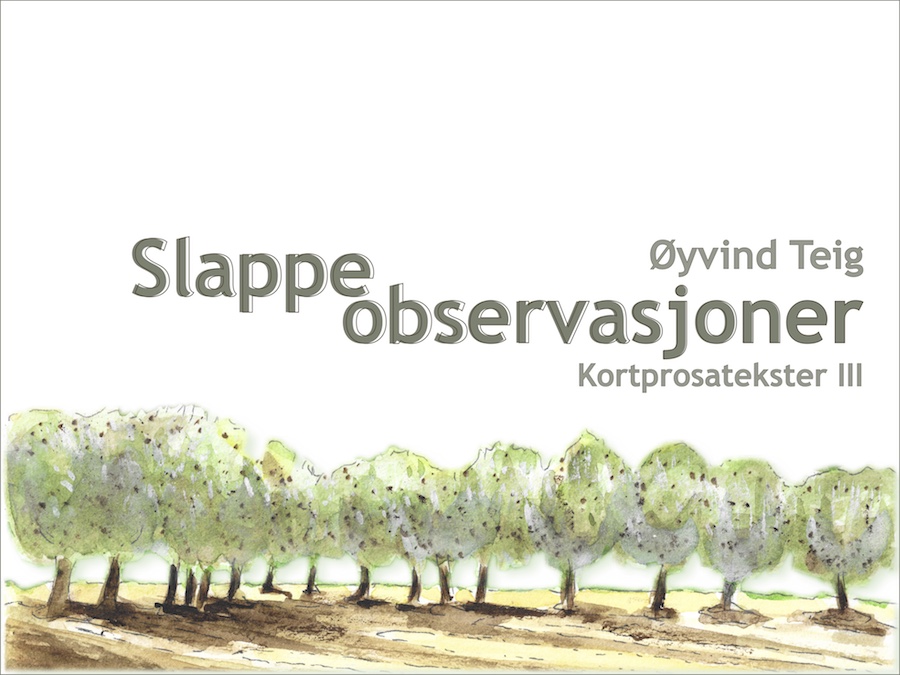 Tools to make the book

I used Apple Pages (7.3) to produce the book, at first running on macOS 10.13.6 (High Sierra). But there was a problem with shadows when I upgraded to macOS Majove. My watercolour paintings were scanned into jpg, but the front page I produced from a jpg by cutting out parts of it, doing some tool based edge refinement, and then exporting a png file with transparency. All of this in Adobe Photoshop Elements Editor (14.1). So there was nothing “between each trunk”. Of course, Preview is a nice tool that I cant’ get away from. I like it especially well with croppping and scaling, colours and all.

I added some shadows to the trees in Pages and exported as PDF, which made the result you see on the cover above. However, when I upgraded to macOS 10.14.1 (Majove) the same version of Pages got the shadows wrong. I described this at the Apple discussion page at PDF export from same version of Pages in High Sierra and Mojave now has bad shadows. Apple contacted me and I sent them 195 MB of zipped files (nothing critical or sensitive they urged – so I didn’t, how could I be 100% certain it was them, after all). So I hope there will be an update. I had already done the work before I updated, so I was fine. But since I have two machines, one with the older High Sierra and one with the newer Majove I did the rest of the work on the High Sierra iMac.

Pages to ePub to .mobi as presented on Kindle PaperWhite

My PaperWhite is model no. DP75SDI, so it’s the 2nd generation of PaperWhite: PaperWhite 2. So I have not been able to test on the newer versions PaperWhite 3 and PaperWhite 4 (as of Jan2019).

Here are some of the problems that I had to run slalom to find my way around. Partly because the a pole seemed to move just before I was going to pass it